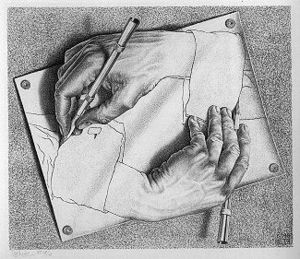 
“In a review in the “New York Times” Book Review, Daniel Handler writes: “And strange? Well, let's get this straight: All great books are strange. Every lasting work of literature since the very weird "Beowulf" has been strange, not only because it grapples with the strangeness around us, but also because the effect of originality is startling, making even the oldest books feel like brand new stories.”

Strange: Out-of-the-ordinary, unusual, curious. "The strangeness around us," says Handler. There is a paradox here. What could be less strange than the world around us? It is the same world that was here yesterday, and the day before that. More to the point: It is a world ruled by law. Inviolable causal bonds. That's what makes science possible.

And yet, and yet. I walk wary. Strangeness lurks on ever side. Strangeness leaps out of every pebble in the path, every wildflower, every spider web flung between weedy stalks. In the midst of the utterly ordinary the extraordinary abounds. Nothing is so commonplace as to be common.

The strangeness of the world, as in literature, has its source in the head, in the convoluted interaction of mind with world. Strange, that we should be here, strangers in a strange land, pilgrims on our own yellow brick roads where nothing is ordinary because everything is perceived through the filter of a unique consciousness.

And strange? Well, let's get this straight. I hope never to loose the capacity to see the strangeness in the familiar, the curious in the everyday, the exception in the unexceptional. "I do not expect a miracle/ or an accident/ to set the sight on fire," wrote Silvia Plath. Just being here is enough. Just being here is surpassing strange."
- http://blog.sciencemusings.com/
Posted by CoyotePrime at 9:57 PM