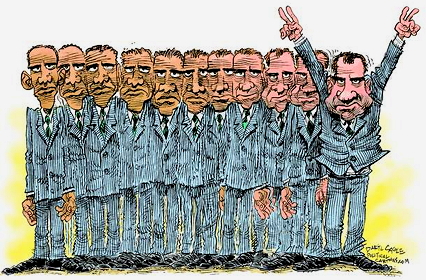 “Oh boy, here we go. "President Barack Obama will not cooperate in a “partisan fishing expedition” over who knew what and when about revelations that groups seeking tax-exempt status were subject to extra Internal Revenue Service scrutiny. “We are going to work with Congress, as the president said, in legitimate oversight,” Dan Pfeiffer, a senior adviser to Obama, said today on ABC’s “This Week With George Stephanopoulos” program. “What we’re not going to participate in is a partisan fishing expedition designed to distract from the real issues at hand.”

With all due respect Mr. President (and that would be "none" as far as this goes, if you care) this isn't under your control and never was. That's why we have a government with checks and balances, and three distinct branches. You only head up one of them. The others are equals to you, not your subordinates. Congress has every right to subpoena whatever it wants. You can try to fight that but there is no valid "executive privilege" claim available when it comes to abuses by the IRS.

Finally, I will remind you of this:

This conduct has included one or more of the following:

He has, acting personally and through his subordinates and agents, in violation or disregard of the constitutional rights of citizens, authorized and permitted to be maintained a secret investigative unit within the office of the President, financed in part with money derived from campaign contributions, which unlawfully utilized the resources of the Central Intelligence Agency, engaged in covert and unlawful activities, and attempted to prejudice the constitutional right of an accused to a fair trial.

He has failed to take care that the laws were faithfully executed by failing to act when he knew or had reason to know that his close subordinates endeavoured to impede and frustrate lawful inquiries by duly constituted executive, judicial and legislative entities concerning the unlawful entry into the headquarters of the Democratic National Committee, and the cover-up thereof, and concerning other unlawful activities including those relating to the confirmation of Richard Kleindienst as Attorney General of the United States, the electronic surveillance of private citizens, the break-in into the offices of Dr. Lewis Fielding, and the campaign financing practices of the Committee to Re-elect the President.

In disregard of the rule of law, he knowingly misused the executive power by interfering with agencies of the executive branch, including the Federal Bureau of Investigation, the Criminal Division, and the Office of Watergate Special Prosecution Force, of the Department of Justice, and the Central Intelligence Agency, in violation of his duty to take care that the laws be faithfully executed.

In all of this, Richard M. Nixon has acted in a manner contrary to his trust as President and subversive of constitutional government, to the great prejudice of the cause of law and justice and to the manifest injury of the people of the United States.

Wherefore Richard M. Nixon, by such conduct, warrants impeachment and trial, and removal from office."

Care to do it again Mr. President? I'll remind you, Mr. Obama, that this is not under your control either.”