Satire: “Obama Asks Staff to Start Cc’ing Him on Stuff” 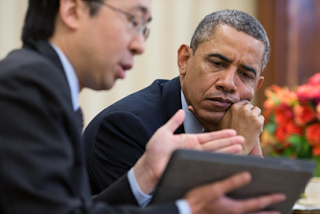 WASHINGTON (The Borowitz Report)— “In a dramatic departure from existing White House procedures, President Obama requested today that his staff start cc’ing him on stuff. “Look, I know a lot of you think I’m really busy and you don’t want to bother me,” the President reportedly told his staff in an Oval Office meeting. “But cc me anyway. It’s good for me to keep up on what’s going on around here. It’s not good when I turn on the news and they’re talking about something at the White House and I’m like, whoa, when did that happen?” Mr. Obama added. “I think cc’ing me would go a long way toward fixing that. Maybe put a Post-It note on your computer saying, ‘CC POTUS,’ so you don’t forget,” he said as the meeting broke up.

Afterward, the President told aides that he “felt really good” about the meeting and was “really looking forward to people looping me in on stuff.” But Mr. Obama’s mood soured later in the day, sources say, when his e-mail address was left off a message bearing the subject line, “Things the Treasury Dept. Is Planning to Do.” Mr. Obama hastily reconvened his staff, telling them, “Look, maybe I didn’t make myself clear. That’s just the kind of thing I should have been cc’d on. Even Biden got that one. Could one of you please forward it to me?” As of press time, Mr. Obama had not yet received the e-mail.”
- http://www.newyorker.com/
Posted by CoyotePrime at 11:58 AM