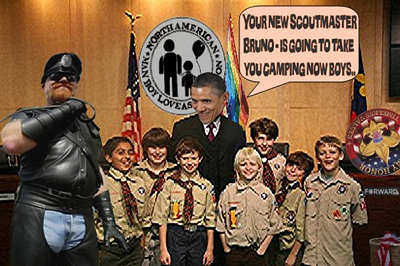 WASHINGTON (The Borowitz Report)— “Supreme Court Justice Antonin Scalia, who for the past forty-seven years has served as a weekend scoutmaster for the Boy Scouts of America, angrily resigned from that position yesterday, effective immediately. Justice Scalia quit his post in a terse resignation letter that read, in part: “Some of the happiest memories of my adult life have been as a scoutmaster. Huddling under blankets around the campfire, and so forth. But now, all of that has been ruined. Ruined.”

Shortly after sending the letter, Justice Scalia destroyed his scoutmaster uniform in the blazing fireplace of his Supreme Court office. Later, he went across the hall to share his decision with his close confidant on the Court, Justice Clarence Thomas, telling him, “There’s nowhere I feel safe anymore, Clarence. The military? The N.B.A.? Nowhere. I guess the only place I still feel safe is the Supreme Court. This is still a safe place, isn’t it?” Justice Thomas said nothing in reply.”
- http://www.newyorker.com/
Posted by CoyotePrime at 6:04 PM