Satire: “Syrian Rebels Urge McCain to Get Over Losing to Obama” 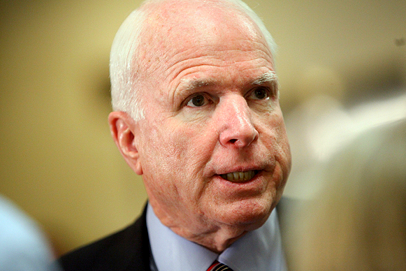 SYRIA (The Borowitz Report)— “During a meeting yesterday with Sen. John McCain (R-Arizona), Syrian rebels told the senator that he still seemed “really bitter” about losing the 2008 election to President Obama and advised him to “get over it.” After meeting with the Arizona senator in the border region near Turkey, a spokesman for the Syrian rebels told reporters that while they appreciated Sen. McCain’s support, “We were kind of uncomfortable with the place it was coming from. It was pretty obvious to me and the other rebels that everything McCain was doing was just to get back at Obama,” the rebel spokesman said. “And we were like, look, that election was five years ago. It’s time to move on.”

Sen. McCain denied that his support of the Syrian rebels had anything to do with a personal vendetta against President Obama, but according to the rebel, “Every time he said ‘Obama,’ a vein in his head kind of bulged out.” “The man is a simmering cauldron of rage,” the Syrian rebel said. “He needs to turn his anger toward Obama into something more positive. You can’t carry all of that hate around with you forever—it’s not healthy.” For his part, Sen. McCain said that he was “finished” with the Syrian rebels and would now focus on starting a war with North Korea.“
- http://www.newyorker.com/
Posted by CoyotePrime at 3:38 PM