"Why Bernanke and His Pals Are Terrified- Now, Mr. Spock!" 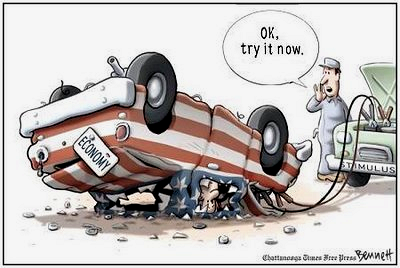 1) Chicago Fed President, Charles Evans who is one of the biggest pushers for QE, stated that the Fed has “the appropriate monetary policy in place” and that the economy is “improving quite a lot.”

2) The Bank of Japan is beginning a two-day policy meeting today.

Regarding #1, Evans has been one of the biggest pushers for more QE. Throughout 2011 and 2012, every time he appeared on TV he stated that the Fed should do more. So for Evans to suddenly change his tune and state that the Fed’s current policy is “appropriate,” indicates a significant shift in tone. This goes along with the Fed’s recent hint at tapering QE, which we’ve noted before on these pages. It’s now becoming more and more clear that the Fed is planning on tapering QE in the coming months and is trying to manage down investor expectations. Which means that stocks are going to be losing some (not all) of their life support.

Regarding #2, Japan is beginning a two-day monetary policy today. As noted yesterday, Japan is Ground Zero for the great QE experiment. For decades now, Bernanke and his pals have claimed that the biggest problem with the Fed’s actions during the Great Depression was that it didn’t do enough. Japan, which has now engaged in NINE QE efforts, has finally hit the “enough” stage by announcing a record $1.2 trillion QE plan. To put this in perspective, Japan’s economy is $5.86 trillion, so this single QE effort is equal to 20% of their GDP.

If this plan fails to bring about economic growth in Japan, or worse still fails to bring about growth and unleashes inflation, then it’s GAME OVER for Central Bankers. Their one great claim “we’re not doing enough QE” will have been proven to be total bunk. At that point there is literally nothing they can do.

We’re keeping an eye on the meeting in Japan for hints that QE isn’t working or that the Bank of Japan may attempt to taper it. If this proves to be the case, then we’re in for a truly rough time in the markets. Investors, take note… the financial system is sending us major warnings… If you are not already preparing for a potential market collapse, now is the time to be doing so." 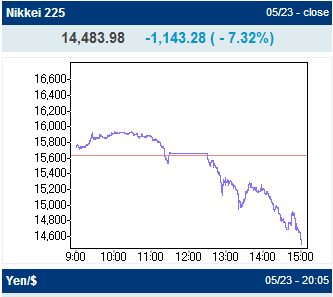 Helping accelerate the decline was the China PMI which was under 50 (negative, that is), throwing cold water on the China will save the world crowd.  In point of fact, China has been losing their battle with credit games for over two years- but these sorts of shifts take time to come to fruition. Let us remember that margin debt has risen to outrageously ridiculous levels.  This means that the clerk is going to be making some calls, if they haven't already started being received.

As I have said over the last couple of months this has the nasty feel of still air just before a big tornado comes ripping through- or like 2007, or like early 2000. Not only is margin debt ridiculously high, much of which is likely out to hedge funds (speaking of which, how many piled into that Japanese trade, turning the crank on their leverage as "profits" expanded) and now are looking at losses that are likely in the 5-7% range over one night?  I'll bet the list contains a few names and well-known ones. CNBC is pumping just like they were last time... and the time before that.  "The declines are not nearly as bad."

Who remembers that in 2007 the same pattern initiated, with the Asian markets leading. Then the losses were "magically" recovered and the market roared higher, finally posting its apex in the fall. Today the market moves much faster.  I would not be even slightly surprised if the instabilities that central banks have intentionally put into the system go "prompt critical" this year.

I'm sure there will be many who will dismiss this as "Oh that Denninger, he's just a perma-bear." My riposte is simple:  While the extraordinary madness of crowds can take manias much further than anyone could ever believe, the math is never wrong.”
- http://market-ticker.org/

Of course, the "Now, Mr. Spock" term comes from here:

Posted by CoyotePrime at 1:46 PM