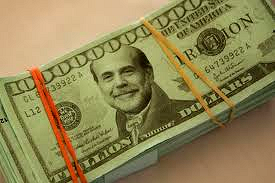 "Gold rose $24 per ounce yesterday. The Dow fell 12 points. The smart money is using this dip to buy gold. Why? Because the world's major stock markets... currencies... and economies all depend on reckless measures by central banks. In the short run, the central banks can make things appear safe and stable. How? By making lending money at ultra-low rates the norm. It's hard for major players to go broke; they can just refinance. But in the long run, those same policies can lead to instability, bubbles... and disaster.

Paul Krugman says that economics is "not a morality play." But he's wrong. That's exactly what it is. And Japan is going to prove it first. Yes, it may be a good thing we congratulated ourselves when we did. If we'd waited a few days, our Trade of the Decade wouldn't look so good.

The important news yesterday came from Japan. Bloomberg reports: "Japan's Topix index tumbled almost 7%, the most since the aftermath of the March 2011 tsunami and nuclear disaster, as financial firms slid amid rising bond yields. Nikkei 225 Stock Average futures traded in Osaka and Singapore fell in after-hours trade, signaling further declines."
Every company in the Nikkei 225 retreated for the first time since April 2005... "Rising interest rates is the story today," said Tomomi Yamashita, a fund manager who helps oversee the equivalent of $5 billion at Shinkin Asset Management Co. in Tokyo. "There's also a lot of profit-taking going on. When volatility is high, investors want to take off risk."

Credibly Irresponsible: As you know, Japan is always ahead of us. Its go-go economy peaked out in 1990. The US dot-com boom peaked out 10 years later. Japan's stock market hit a high in 1990. US stocks reached a high 10 years later (though prices hit nominal highs later). Japan resorted to bailouts... ZIRP and QE in the 1990s. The US began these experiments in the following decade.

And how about this? Japan's population has been falling for years. America's women only recently began reproducing at below-replacement levels. There are differences, to be sure. In the US, we read left to right, front to back. And we eat our meat well-done! But in important matters, the Japanese are always ahead of us. And now they're being even more reckless than the Fed– increasing QE at a rate that we've never seen before. From Pragmatic Capitalism: "When a central bank commits to being "credibly irresponsible," it's not unusual for market participants to take it at its word. And the commitment to support equity prices gives traders a false sense of confidence that can then lead to a sort of Ponzi environment that leads to a huge boom. By committing to being "credibly irresponsible," the central bank can actually contribute to the boom, which then creates the imbalance that results in the bust."

This is almost a "Volcker moment" for Japan. That is, Japan's central bank has changed direction. Investors take note. But the Bank of Japan's new governor, Haruhiko Kuroda, is no Paul Volcker. He's more like Gideon Gono of the Reserve Bank of Zimbabwe. Volcker was incredibly responsible. Gono was credibly irresponsible. And when the markets realized how irresponsible he was... they went wild. Mr. Kuroda announced that he will double Japan's monetary base. Investors have been buying stocks enthusiastically ever since. Which is why our Trade of the Decade – "Buy Japanese Stocks. Sell Japanese Bonds" – looks so good.

Stocks have gone up. Bonds have gone down. Does this mean that Japan's troubles are behind it? Not at all. It means only that, when you've got a reckless central banker, stocks are a better buy than bonds. Stocks will be lifted on a "rising tide." Bonds will always go in one direction: down. Japan's real crisis is still ahead. That's what yesterday's big selloff signals- trouble. And there's more trouble is coming for the US and Europe too. Most likely, they'll want to follow Japan as it heads for disaster.

The new governor of the Bank of England, Canadian Mark Carney, has just proposed that his bank imitate the rapid money-printing policies of the Bank of Japan. From the Financial Times: "QE may have done its job as far as propping up the financial sector goes, but... For the economy to really recover, and for it to avoid another massive shock, there is still an urgent need to redirect much of the liquidity that's been created– currently chasing risk assets  to those frozen out of the economy more permanently."
"Print more money! Drop it from helicopters! Banzai!"
- http://www.thedailyreckoning.com
Posted by CoyotePrime at 4:07 PM