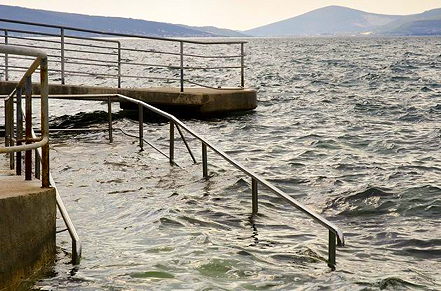 “5 Terrifying Statements in the Leaked Climate Report”
By Chris Mooney

“Climate Desk has obtained a leaked copy of the draft Intergovernmental Panel on Climate Change's 2013 Summary for Policymakers report, which other media outlets are also reporting on. The document is dated June 7, 2013. We recognize, as we've previously reported, that this document is not final, and is in fact certain to change.

Most media outlets are focusing on the document's conclusion that it is now "extremely likely"—or, 95 percent certain—that humans are behind much of the global warming seen over the last six decades. But there is much more of note about the document—for instance, the way it doesn't hold back. It says, very bluntly, just how bad global warming is going to be. It gives a sense of irreversibility, of scale…and, of direness.

In particular, here are five "holy crap" statements from the new draft report:

• We're on course to change the planet in a way "unprecedented in hundreds to thousands of years." This is a general statement in the draft report about the consequences of continued greenhouse gas emissions "at or above current rates." Unprecedented changes will sweep across planetary systems, ranging from sea level to the acidification of the ocean.

• Ocean acidification is "virtually certain" to increase. Under all report scenarios, the acidification of the world's oceans will increase—the draft report calls this outcome "virtually certain." As we have previously reported, more acidity "threatens the survival of entire ecosystems from phytoplankton to coral reefs, and from Antarctic systems reliant on sea urchins to many human food webs dependent on everything from oysters to salmon."

• Long-term, sea level rise could be 5 to 10 meters. Journalists are already citing the draft report's prediction that by the year 2100, we could see as much as three feet of sea level rise. But there is also a more long-range sea level scenario alluded to in the draft report, and it's far more dramatic and alarming.

Taking a look at the planet's distant past, the document ascribes "very high confidence" to the idea that sea levels were "at least 5 [meters] higher" during the last interglacial period, some 129,000 to 116,000 years ago. It also adds that sea level during this period probably did not exceed 10 meters higher than present levels. Finally, the draft report says, with "medium confidence," that temperatures at that time weren't more than 2 degrees Celsius warmer than "pre-industrial" levels.

Add it all up, and what that means is that if we exceed 2 degrees of warming beyond pre-industrial levels, then we could be looking at radically higher oceans, and submerged coastal cities, in the long run. And just how close are we to exceeding 2 degrees Celsius? Several scenarios used for the draft report project "high confidence" that we'll get there by the end of the century. At that point, seas would continue to rise well beyond the year 2100, and by much more than three feet.

• This also implies a substantial melting of the Greenland ice sheet. The draft report adds that during the last interglacial period, the melting of Greenland "very likely" contributed between 1.4 and 4.3 meters of global sea level rise, with additional contributions coming from the melting of Antarctica. If Greenland were to melt entirely, it is estimated that sea level would rise by about seven meters.

Thus, a substantial Greenland melting could also be set in motion by the end of this century, which would eventually result in dramatic sea level increases. To be sure, most of this wouldn't occur during the current century—it would play out on a much longer time scale. But over 1,000 years or more, the draft report says, Greenland could melt almost entirely, and much of the change might be "irreversible." (Granted, the report expresses low confidence about the precise temperature threshold required to bring about a full melting of Greenland.)

• Much of the carbon we've emitted will stay in the atmosphere for a millennium…even after we've stopped emitting it. The draft report says that 20 percent of the carbon dioxide currently in the atmosphere will stay there for an almost unimaginably long time—more than 1,000 years. Even if we were to completely cease all greenhouse gas emissions, the draft report adds, warming would continue for "many centuries." "A large fraction of climate change," the document intones, "is thus irreversible on a human time scale." The only way out would be if our emission levels were "strongly negative for a sustained period"—which, to put it mildly, seems highly unlikely.”
- http://www.motherjones.com/
• 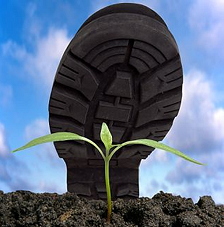 “The crucified planet Earth,
should it find a voice and a sense of irony,
might now well say of our abuse of it,
"Forgive them, Father, they know not what they do."
․
The irony would be that we know what we are doing.
․
When the last living thing has died on account of us,
how poetical it would be if Earth could say,
in a voice floating up perhaps
from the floor of the Grand Canyon,
"It is done. People did not like it here.”
․
- Kurt Vonnegut, "Requiem"
Posted by CoyotePrime at 7:40 PM