“These three bright nebulae are often featured in telescopic tours of the constellation Sagittarius and the crowded starfields of the central Milky Way. In fact, 18th century cosmic tourist Charles Messier cataloged two of them; M8, the large nebula left of center, and colorful M20 on the right. The third, NGC 6559, is above M8, separated from the larger nebula by a dark dust lane. All three are stellar nurseries about five thousand light-years or so distant. 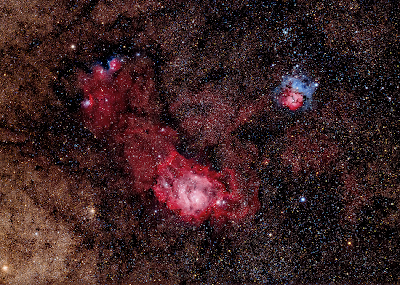 Click image for larger size.
The expansive M8, over a hundred light-years across, is also known as the Lagoon Nebula. M20's popular moniker is the Trifid. Glowing hydrogen gas creates the dominant red color of the emission nebulae, with contrasting blue hues, most striking in the Trifid, due to dust reflected starlight. The colorful skyscape recorded with telescope and digital camera also includes one of Messier's open star clusters, M21, just above the Trifid.”
- http://apod.nasa.gov/apod/astropix.html
•
"When I heard the learn’d astronomer,
When the proofs, the figures, were ranged
in columns before me,
When I was shown the charts and diagrams,
to add, divide, and measure them,
When I sitting heard the astronomer where
he lectured with much applause in the lecture-room,
How soon unaccountable I became tired and sick,
Till rising and gliding out I wander’d off by myself,
In the mystical moist night-air, and from time to time,
Look’d up in perfect silence at the stars."

- Walt Whitman
Posted by CoyotePrime at 2:00 AM