"‘Boiling Sea’ Off Fukushima"
By Live Free or Die
․
"Now I am become Death, the destroyer of worlds."
- “Bhagavad Gita”

"The sea is boiling off of the coast of Fukushima, Japan and the picture below has been called a viral photo of the day by Coolbuster. Check out the picture, what is that all about? It certainly can’t be good for any plant or animal life left off of the coast of Japan… if this radiation keeps leaking, and there’s no way to stop it, will boiling seas spread all the way across the Pacific Ocean to the West Coast of the United States? If so, what happens then? We are so ‘fuked’. Three brand new video reports below share the Fukushima news that you’re not getting from our government or the mainstream media. 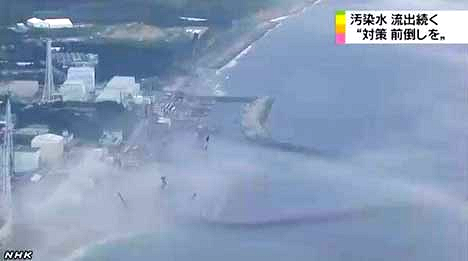 A Twitter photo showing a “boiling sea” off the coast of Japan,
near the Fukushima nuclear power plant with radiation leaks.

So, why is the sea ‘boiling’? The answer can be found on the NaturalNews.com report. “After a 29-month cover-up, the Tokyo Electric Power Co (Tepco) is now calling for international help and has all but admitted Fukushima’s radiation leaks are spiraling out of control. In addition to the leaking water storage units that are unleashing hundreds of tons of radioactive water each day, Tepco now says 50% of its contaminated water filtration capability has been taken offline due to corrosion,” the news website published Tuesday. DemocracyNow.org posted that Japan’s nuclear regulator said Wednesday it has officially raised the radioactive water leak severity rating to Level 3 on the international scale for radiological releases.


The simulation from NOAA's HYSPLIT model shows a continuous release of tracer particles at a rate of 100 per hour representing the Cesium-137 emitted from Fukushima Daiichi. Each change in particle color (red, orange, yellow, cyan, green, blue, violet, magenta) represents a decrease in radioactivity by a factor of 10. Radioactivity decreases only due to wet and dry deposition. Decay is not a factor for Cesium in this short duration simulation compared to its long-half life. The air concentration would be computed from the particle density so it is only partially related to the color scale. Emissions occurred from 12-31 March, but the particles are followed through the end of April using meteorological data from the 1-degree resolution NOAA global analyses. The maximum cesium emissions on March 15th are shown by the red color and represent a particle activity of 5E+12 Bq."
- http://beforeitsnews.com/
•

Oh my God... folks, please do a Search on this blog for "Fukushima." You'll find what you need to know. Anyone who understands what the above picture means will be as absolutely horrified as I am. What it means is that at least one of the 3 total-melt-down molten slag cores, "burning" at 5,600 degrees F, has reached ground water, and is now boiling off unlimited amounts of sea water, filling the atmosphere with highly radioactive steam which will be carried by wind and ocean currents everywhere. There is no possibility of stopping this now, no technology for dealing with it. May God have mercy on us all... - CP
Posted by CoyotePrime at 2:53 AM