"But We Should Trust The Cops!" 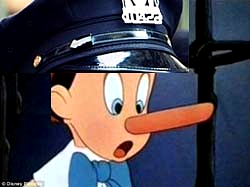 "But We Should Trust The Cops!"
by Karl Denninger

"Uh huh. "Law enforcement officials in the area were suspicious of the man and regularly sent undercover officers to do surveillance on his store. During one trip, an officer is caught in plain view of store cameras pulling out a small bit of crack cocaine and putting it on the counter when no one was looking. “He comes in, places the crack on the counter. Crack, which under federal sentencing guidelines, would get him 4 years in jail. Under New York State law would get him 2 to 7 years in jail,” attorney Kevin Luibrand said while narrating the video for an audience that was in stunned by what they saw.
The community is outraged over the incident. The Schenectady chapter of the Southern Christian Leadership Conference has taken the lead on the matter, expressing their shock and concern over the incident. Schenectady County Sheriff Dominic Dagostino reportedly told WNYT-TV that procedures weren’t followed and that the rogue cop who planted the evidence is now on the run. Andrews is in the middle of filing a wrongful arrest lawsuit against the police department."

Why hasn't the cop in question been indicted?  Possession and delivery (which he certainly did!) of crack cocaine is a crime. There is photographic evidence of this crime. Where is the prosecution?

Next we have this: "The National Security Agency paid millions of dollars to cover the costs of major internet companies involved in the Prism surveillance program after a court ruled that some of the agency's activities were unconstitutional, according to top-secret material passed to the Guardian. The technology companies, which the NSA says includes Google, Yahoo, Microsoft and Facebook, incurred the costs to meet new certification demands in the wake of the ruling from the Foreign Intelligence Surveillance (Fisa) court. The October 2011 judgment, which was declassified on Wednesday by the Obama administration, found that the NSA's inability to separate purely domestic communications from foreign traffic violated the fourth amendment."

Two problems here: The FISA Court found the NSA violation the 4th Amendment. This is in direct contravention to what the NSA backers and officials from the NSA itself have both told the public and told Congress under oath.  This makes them both liars and guilty of perjury. Where are the indictments? The cited businesses have claimed they had no involvement in this program and that any interception that took place happened outside of their purview. This report says they were paid, which means they were lying about that too.

Then there's this admission: Late on Friday (of course) the NSA finally put out an official statement admitting to an average of one intentional abuser per year over the past ten years. The AP is reporting that at least one of the abuses involved an NSA employee spying on a former spouse. Meanwhile, the Wall Street Journal suggests that spying on love interests happens somewhat more often: The practice isn’t frequent — one official estimated a handful of cases in the last decade — but it’s common enough to garner its own spycraft label: LOVEINT. A handful is still materially more than once. And this is only what they've admitted to. Since we know factually that the agency and its spokespeople have lied, including lying under oath, do you believe this is all the violations?  Neither do I.

And finally, for good measure: (Reuters) - "The U.S. National Security Agency has bugged the United Nations' New York headquarters, Germany's Der Spiegel weekly said on Sunday in a report on U.S. spying that could further strain relations between Washington and its allies."

The NSA is supposed to be prohibited from operating inside the United States.

The last time I checked New York was inside the United States, and by the way, the UN building is considered to be US Soil- unlike a foreign embassy.

Why should I believe any so-called "law enforcement" agency or any of its adjuncts when the record shows rampant and outrageous lies being promulgated by them, including attempts to frame people for serious felonies and yet you can't seem to find any material evidence of prosecution of those who have been suspected of or even proved to have engaged in such conduct. Come talk to me about "respecting" law enforcement when this has changed and the perpetrators of these acts have faced prosecution for their crimes.”
- http://market-ticker.org/
Posted by CoyotePrime at 7:33 AM