"Defiling the Memory of President Eisenhower" 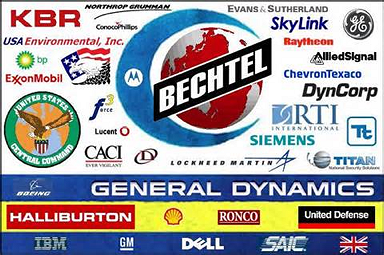 "Defiling the Memory of President Eisenhower"
by Peter Coyne

"On a Tuesday night, 52 years ago. President Dwight D. Eisenhower appeared on TV sets across America. Three days later, he would leave the Oval Office to John F. Kennedy. It all happened very fast. No one was prepared for the grim prophecy Eisenhower would tell that night in his farewell address. “My fellow Americans…” he began.


“Until the latest of our world conflicts, the United States had no armaments industry. American makers of plowshares could, with time and as required, make swords as well. But now we can no longer risk emergency improvisation of national defense,” he continued. “We have been compelled to create a permanent armaments industry of vast proportions. Added to this, three and a half million men and women are directly engaged in the defense establishment. We annually spend on military security more than the net income of all United States corporations…”

“In the councils of government,” he warned, “we must guard against the acquisition of unwarranted influence, whether sought or unsought, by the military-industrial complex. The potential for the disastrous rise of misplaced power exists and will persist. We must never let the weight of this combination endanger our liberties or democratic processes. We should take nothing for granted. Only an alert and knowledgeable citizenry can compel the proper meshing of the huge industrial and military machinery of defense with our peaceful methods and goals so that security and liberty may prosper together.”

Bull’s-eye. In 1961, the words “military-industrial complex” probably sounded nuts. But writing in 2013, I can say with confidence that an alert and knowledgeable citizenry is far more absurd. Back when Ike made his address, defense spending was about $350 billion in today’s dollars. Today, it’s over half a trillion dollars.

In order to keep the money flowing, the Pentagon has pursued a policy of “brass creep.” Case in point: During World War II, there were 30 ships for every admiral. Today there are 973 generals and admirals. There are more admirals than there are ships.

Huh? Many top brass have cohorts of chauffeurs, chefs and secretaries. Some have runway-ready private jets. Still others get motorcade escorts and mansion homes. The cost of the benefits to each top officer works out to roughly $1 million. One general, Kip Ward, used his staff and military equipment to take his wife shopping and send her on taxpayer-funded vacations.

What do these generals do? One retired U.S. army colonel, Jack Jacobs, says many are “spending time writing and defending plans with Congress, and trying to get the money.” They’re essentially lobbyists, but on the Pentagon’s payroll.

Ah… America’s pastime: petitioning government. The U.S. spends over $235 billion per year on armaments. Our country specializes in weapons making. Of the top 100 grossing armament firms, the U.S. is home to the top 47. Go figure, war is profitable.

Lockheed Martin is the largest defense contractor, followed by Boeing and Northrop Grumman. Take a gander at each over the past year… Business is a-boomin’! 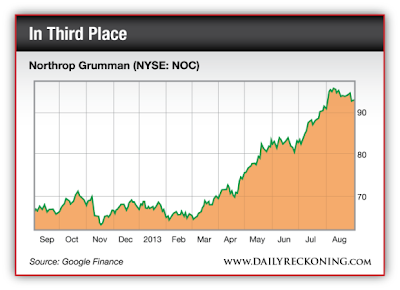 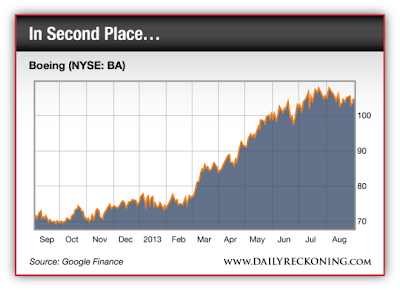 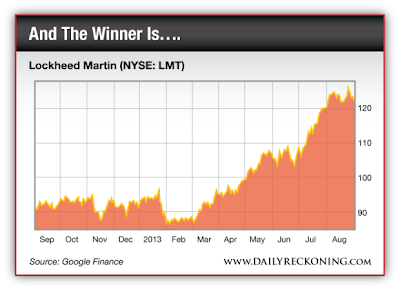 Think these guys want a say in Congress? You bet. I haven’t looked, but I bet Rep. Buck McKeon (R-CA), the chairman of the House Armed Services Committee, doesn’t have to worry about filling his campaign coffers.

Relatively speaking, the defense industry doesn’t spend as much lobbying and campaign money as, say, Big Pharma and the insurance industry do. But the contributions the defense industry makes are extremely targeted on specific members of government. But that’s just the beginning of the incest. Many defense contractors contribute to the Defense Policy Board Advisory Committee. Say the Pentagon holds a panel on the future of military aviation to have an informed perspective. Boeing sends in a few “experts” to weigh in. What do you think they say? “Um… We think aviation should be the primary focus for the Pentagon in the years ahead.”

No kidding… And when the legions of generals and admirals retire from military service? Guess where they land jobs? What would Eisenhower say today? Probably, “I told you so you, idiots!” (No, Eisenhower had more decorum than that.)

He forecast his dour prediction in 1953. Again, Eisenhower, this time speaking to the American Society of News Editors: “Every gun that is made, every warship launched, every rocket fired, signifies, in the final sense, a theft from those who hunger and are not fed, those who are cold and not clothed. This world in arms is not spending money alone. It is spending the sweat of its laborers, the genius of its scientists, the hopes of its children… This is not a way of life at all in any true sense. Under the cloud of threatening war, it is humanity hanging from a cross of iron.”

As a freshman in college, I remember scratching my head at the military trade-off they taught us. “Guns or butter,” they said. I understood it… but I thought it was a poor choice. To really drive it home, it should be “Guns or feeding the homeless.” Or “Guns or a college education.” Or “Guns or cancer research.” Doesn’t that pull your heartstrings a little more?

The bottom line: If you’re making a bomb, you’re not making something else. I don’t know what that something should be… But I’m confident you could think of few things better than a bomb. And that means that for every dollar spent on a bomb, you’re made poorer, in the final sense.

Is there a policy fix to all this? No. The whole friggin’ thing is screwed. And sooner rather than later, too. But who cares about a fix? Policy wonking is messy, ineffective and not something we’re concerned with. We’re concerned with showing you how to preserve your wealth. Then helping you make your wallets fatter. Or simply sharing ways you can fortify your retirement savings to last you through the rest of your life. And the military-industrial complex is the place to accomplish all three of those goals.

Maybe you loathe the defense industry, conniving lobbyists and the politicians, staffers and servicemen that keep the revolving door spinning. But the system offers you a way to build your own wealth better than most other industries. Why? Because defense spending is all telegraphed ahead of time! Take cybersecurity, for example. That’s the new big thing. We’ve started to call the digital ether the “fifth domain of war” after land, sea, air and space.

“The CIA and NSA have launched aggressive new efforts to hack into foreign computer networks to steal information or sabotage enemy systems,” reports The Washington Post, “embracing what the budget refers to as ‘offensive cyberoperations.’” The details came from the latest Edward Snowden leak. Apparently, NSA and CIA spending on intelligence has surpassed adjusted Cold War intelligence spending. The amount spent was $52.6 billion. That was part of what’s called the “black budget,” so you couldn’t have known ahead of time or made an investment. But for other types of cybersecurity contracts you can. And looking back at the big three’s stock charts above, you can image how profitable piggybacking on them could be. It’s as simple as following the money."
- http://dailyreckoning.com/
•
Eisenhower Farewell Address (Full)
- http://www.youtube.com/watch?v=CWiIYW_fBfY&html5=1
Posted by CoyotePrime at 3:34 PM