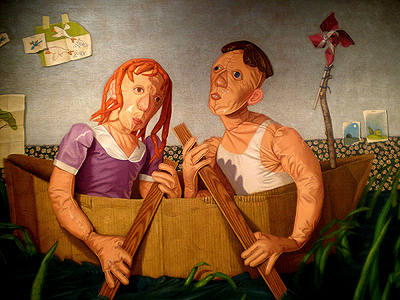 "It is interesting to observe that the word idiot derives from the Greek idiotes, which refers to a "private person" - as distinct from a public person, or one who is involved in determining public life. That is, an idiot follows the rules and laws that others draft and sign - irrespective of whether or not it is in the idiot's interest. Some people in society determine how society will be organized - how its economic surpluses are distributed, how its resources are employed, how its energies are directed, how its cities are designed, its transportation systems are routed, etc. - and others simply follow (or are determined by) these rules. Many of these followers (the idiots) don't even seem to mind this state of affairs. Still others live under the delusional understanding that they are, in fact, somehow in charge of determining the course of social life - through their duly elected representatives, of course, or through their reputed "consumer power."

What is of especial interest to those observing political idiocy is how thoroughly inconsistent and incoherent its ideologies can be. Indeed, many idiots justify the status quo (in which they are consigned to the position of idiot) by appealing to the founding documents of the United States, seemingly oblivious to the fact that the Declaration of Independence's main argument is that the only legitimate form of political organization is one in which people govern themselves. It does not take much critical acumen to recognize that self-government - or autonomy - is irreconcilable with the heteronomy that the idiot is subjected to - irrespective of the degree to which the idiot is aware of his or her particular political impotence.

In other words, we are idiots whether we are aware of our political impotence or not. All that it takes to be a political idiot is to be excluded from the actual processes that determine how the world we live in is organized. And how many of us are in any meaningful way able to determine how things are governed? Because public interest polls consistently show majorities of people supporting social policies (such as universal health care, increased environmental protections, access to free education, an end to the wars of aggression committed by the US, etc.) that are not pursued, it does not seem to be much of a stretch to conclude that most people in this country are idiots. In this respect I am a total idiot. And I suspect that I am not alone in being aware of the fact that I suffer from this regrettable condition. Moreover, I suspect that I am not alone in wanting to change this harmful situation. As with other collective problems, however, our collective political and economic idiocy requires a collective solution; the first step of which is recognizing that most of us are these alienated political idiots in the first place. As Obama and the privatizing classes maneuver to eliminate Social Security, contrary to public opinion, we must accept the fact that they have turned us into idiots. How long we remain idiots, though, is another question."
- http://www.opednews.com/
- http://hygiecracy.blogspot.com
Posted by CoyotePrime at 5:45 PM