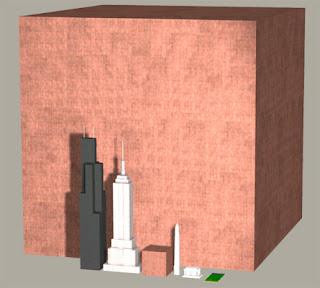 
Here we have the buildings we used for scale back at a trillion, but they're now a bit dwarfed by our new cube of pennies. This is a quadrillion, or a thousand times one trillion. This cube is roughly a half-mile wide and would weigh an astonishing three billion tons."
- http://www.kokogiak.com/megapenny/seventeen.asp
•
"There are two systems in use for naming numbers larger than a million: In the American system, the Latin prefix refers to the number of groups of three zeros, not including the last group of three, which represents a thousand. Thus in the USA, a billion is 1,000,000,000 (109) and a quadrillion is a mere 1,000,000,000,000,000, (1015).

Email ThisBlogThis!Share to TwitterShare to FacebookShare to Pinterest
Labels: Quadrillion.com