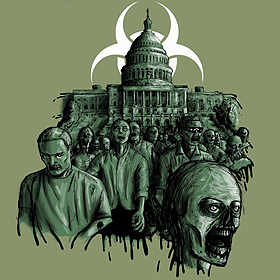 “Return to Zombieland”
by Bill Bonner

“Yes, it’s back to school. Back to work. And back to Zombieland. The Dow dropped 64 points yesterday. Gold rose above $1,400 an ounce. What’s next? We’ll wait and see. But we’ll wait and see from a safe distance.

Last night, we drove into the heart of darkness to celebrate a birthday. The party was held in Georgetown – the richest enclave in the richest city in the richest country in the world. How did Georgetown get so rich? It’s always a culture shock for us. Coming from Baltimore, we meet a different kind of person in Washington. Richer. More worldly. Better dressed. Better looking. More sophisticated. Well traveled. Lawyers. Architects. Ambassadors. People who work for trade associations. Lobbyists. Congressional staffers.

“My husband would have been here,” said a pretty woman. “But he’s in Alaska fishing.”

“Do you live here in Georgetown?”

“Yes… but my husband had been reluctant to leave our home in Potomac. So, we split our time. We have a farm down in Charlottesville too.”

“What does your husband do?”

“He’s a lawyer. I’m so delighted. My daughter just passed the bar exam. She and her husband are both lawyers too.”

The Clinton Connection: Terry McAuliffe went to Georgetown University Law Center. In the interest of full disclosure, so did we. But, in the interest of preserving our dignity, we hasten to add that we are not now, nor have we ever been, a member of the bar. Or any other respectable trade. McAuliffe is running for governor of Virginia. Does the name sound familiar? He was chairman of the Democratic National Committee. He raised millions of dollars for the Clintons, with whom he is tight. How tight? Well, Hillary’s bro’ Tony is under investigation for having abused a government program with Terry. It had to do with a new electric automobile company that McAuliffe set up: GreenTech.

What does a political hack like McAuliffe know about the auto industry? Nothing. But nothing is what you need to know in today’s zombie world. The idea is to get government grants, subsidies, crony deals and tax breaks… at which Mr. McAuliffe and Mrs. Rodham Clinton are experts. This little note from Wikipedia describes one of McAuliffe’s early achievements. He invested $100… and somehow got half of assets worth $50 million.

Sweet deal? You decide: In 1990, federal regulators seized Swann’s [Terry McAuliffe’s father-in-law] American Pioneer Savings Bank… The Resolution Trust Corporation, a federal agency, took over American Pioneer's assets and liabilities and sued McAuliffe and a former unit of the bank foreclosed on a real estate loan. Under the guidance of Swann, McAuliffe partnered with a pension fund controlled by the International Brotherhood of Electrical Workers and the National Electrical Contractors Association to buy some American Pioneer real estate, valued at $50 million, for $38.7 million from the Resolution Trust Corporation. Of the purchase amount, McAuliffe paid $100, while the pension fund paid $38.7 million; McAuliffe still received a 50% equity stake.

Hey, it pays to have friends in high places. Not that we’re complaining. Government programs are meant to be abused. And government money – taxpayers’ money – is meant to change hands… from the outsiders to the insiders. That’s how government is meant to work. Always has. Always will. Taxpayers are outsiders. The McAuliffe-Rodham partners are insiders. ‘Nuff said.

There's always been a symbiosis between Wall Street and Washington to some degree. But I think the Clinton Era introduced a whole new level of magnitude to this. And Bob Rubin, who was the sort of storied head of Goldman Sachs for many years, coming to take the reins of Treasury was really – I mean, he was a real guru. And brought a lot of protégés, Larry Summers being the biggest example, to town. Tim Geithner being another one."

Small world. Larry Summers is our No. 1 rival. According to the press, he’s the man at the head of the list (by about 10,000 other names) for the top job at the Fed. His phone rings night and day. Ours never does. He has lots of ideas about how to fix the economy. We only have one. He has power…money… fame… Well, that’s what you get when you’re an insider.

Here is how it works... As the insiders gain power and influence, they are able to shift more of the nation’s real wealth to themselves. That’s why Summers is up for the job of chief central banker for the United States of America, rather than, say, someone who knows something about banking… or someone who has actually worked at a bank. Being an insider is more important than banking experience or knowledge of the economy.

As the insiders take more and more power, gradually, the outsiders are ruined as the insiders grow rich. The taxpayers, who might have been outraged a few years ago, become blasé. They accept corruption as a fact of life. They don’t fight it. Instead, they want to join it. They no longer send their sons and daughters to Detroit to make real cars. Instead, they urge their progeny to go to McLean, Virginia, home of GreenTech.

McAuliffe said the company would hire 1,500 people and turn out 10,000 cars a year. So far, no cars have been built. And although pal Tony Rodham has reportedly raised $45 million for the company in his “visa for sale” program, only about 100 people have been employed. As far as we know, not a single one has ever so much as turned a lug nut. But that’s the discreet charm of the insiders: Someone else turns the lug nuts. They twist the money."
- http://www.thedailyreckoning.com
Posted by CoyotePrime at 9:59 AM