Satire: “Obama Promises Syria Strike Will Have No Objective” 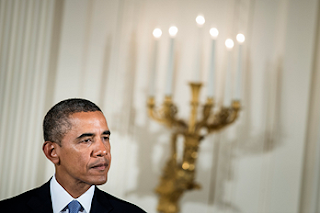 “Obama Promises Syria Strike Will Have No Objective”
by Andy Borowitz


WASHINGTON (The Borowitz Report)— “Attempting to quell criticism of his proposal for a limited military mission in Syria, President Obama floated a more modest strategy today, saying that any U.S. action in Syria would have “no objective whatsoever.” “Let me be clear,” he said in an interview on CNN. “Our goal will not be to effect régime change, or alter the balance of power in Syria, or bring the civil war there to an end. We will simply do something random there for one or two days and then leave. I want to reassure our allies and the people of Syria that what we are about to undertake, if we undertake it at all, will have no purpose or goal,” he said. “This is consistent with U.S. foreign policy of the past.”

While Mr. Obama clearly hoped that his proposal of a brief and pointless intervention in Syria would reassure the international community, it immediately drew howls of protest from U.S. allies, who argued that two days was too open-ended a timeframe for such a mission.

That criticism led White House spokesman Jay Carney to brief reporters later in the day, arguing that the President was willing to scale down the U.S. mission to “twenty-four hours, thirty-six tops.” “It may take twenty-four hours, but it could also take twelve,” Mr. Carney said. “Maybe we get in there, take a look around, and get out right away. But however long it takes, one thing will not change: this mission will have no point. The President is resolute about that.”
- http://www.newyorker.com/
Posted by CoyotePrime at 3:34 PM