"Singing To The Deer" 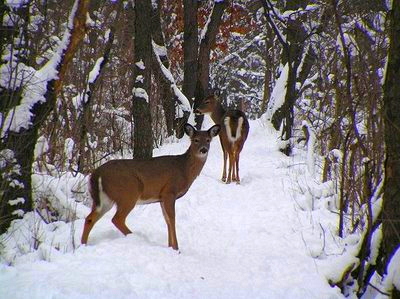 "Singing To The Deer"
by Patricia Monaghan

“At solstice, the woods were bright in a snowy way, the sky pearl gray above the stately maples and gnarled burr oaks. An Alaskan marooned in the urban Midwest, it took me years to find this nearby patch of relatively undisturbed land where I can sense the power of wildness. Now I go there often, watching the seasons unfold their changeful unchanging patterns in the increasingly familiar forest. I especially like to walk among the sleeping trees in the half-lit silence of winter dawns. The trail I follow winds and twists, new patches of mixed woodland appearing at every turn. That morning, I reached a point where the path turns sharply left to follow a small ravine. In spring, ephemeral ponds—lively with salamanders, loud with frogs—form in the creases of the forest there. But in frozen winter, I expected nothing beyond silence and wind.

So I did not see them at first, three deer beside three empty larches. When I made them out—gray-dun hides against a gray-dun world—they were motionless, white tails aloft like flags of distress. I stopped in my tracks, thinking how lucky I was to meet the animal my Celtic forebears called the spirit of wildness on that auspicious day. I often encounter deer on my morning walks. The woods are close enough to roads and homes that we humans are no strangers to them. But like any animal of the suburban wild—squirrel or opossum or raccoon—the deer keep their distance. An instant after they see me, they bound silently away, their white-flag tails on high alert. But this morning, the deer only stared at me across the ravine. To the left stood a tall stately doe; to the right, an older heavier one; in the center, one of the previous spring’s fawns, all gangly adolescence. Huge soft ears held high, they cast dark liquid gazes at me.

And did not run.

Desire burst in my heart: to speak to the deer, to tell them how beautiful they were, to thank them for bringing wildness to the edge of the vast city. To speak from my heart, my own little wild heart, to theirs. To celebrate the season with them. But I stood silent, for I do not speak the language of deer. I stared silently at them, awaiting the inevitable flight. But moments stretched out like fingers of light from the rising sun, and the deer did not run away.

Then, for no reason I can easily explain, I began to sing, my voice loud in the silent forest. A plaintive minor-keyed medieval song sprang to my lips, a holiday carol I’ve known since girlhood. Lo how a rose e’er blooming, from tender stem hath sprung. . . It came a floweret bright, amidst the snows of winter, when half-spent was the night. I thought the sound of my voice would frighten the deer away, but I wanted to speak to them, and music seemed the only way. Just as I expected, they began to move. But not swiftly. And not into the forest. Not away from me at all.

No. One slow step at a time, the deer moved towards me. When I started singing, they were perhaps fifty feet away. By the time I began the second verse, they were half that distance. By the time I finished the song, the deer stood just across the ravine.

In the sudden silence at the song’s end, three tails went suddenly up again, sounding a silent alert. So I began another song. Tails went down, ears moved slightly forward. Dawn light emblazoned lemon and melon stripes upon the snow as three deer listened to carol after carol after carol. A quarter-hour passed and still they did not move. I kept singing.

It was not the deer but me who ended our encounter. The sky had moved from pearl to sherbet to azure, and I had promises to keep. I thanked the deer for listening to my dawn chorus. The sound of my words shook them awake. Tails went up, forelegs tucked up, and in an instant they were gone.

In the silence, I stared into the gray forest. Only a few months earlier, standing below a high-massed mountain glacier I have known since childhood, now shrinking fast away, its ancient snows surging down to the gray sea in cold torrents, I had felt overwhelmed with hopelessness. Do we only take from nature, giving nothing in return? If so, what use are we? Why should the universe continue to provide for us, if we are such ungrateful children?

But there on the edge of a tiny ravine, hope washed over me like light. Perhaps there is a reason for our being. Perhaps what we give our lovely blue earth is song. Beauty. Art. Perhaps that is the reason we were created: to entertain the universe. Perhaps the great spirit is amused and touched, thrilled and delighted by our childlike creativity. Today we leave art to the professionals: to those with beautiful voices and firm bodies and exciting visions. But perhaps art is not frozen moments of perfection but the process of creation itself. Perhaps we were put here to pleasure the world, making art as spontaneously and joyfully as children drawing great yellow suns with wax crayons. Perhaps we should all be singing more, and dancing, and painting with bright colors, and chanting out poems. Perhaps we silly wonderful amateurs most please the universe when we act that way.”