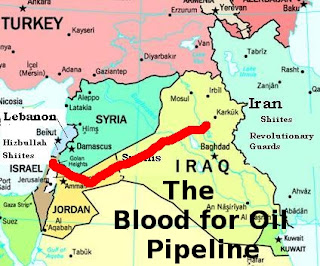 “Let's take a rather-jaundiced but honest look at Syria, shall we? First, why does Syria matter?  That's pretty simple - they're a rather interesting energy conduit from a strategic point of view.  Syria also "owns" the Golan Heights, which is under Israeli occupation (Ed: yes, I know Israel considers it to have been "annexed" - the rest of the world sees it differently.)  Having part of your land occupied by a foreign power is always good for your general civic mood, you see.

In addition Syria is an ally of both Iran and Russia, and the United States and Israel are concerned that Iran is developing nuclear weapons.  They may be and they may not; the evidence is not clear.  However, what is clear is that the uranium/plutonium fuel cycle is trivially exploitable to produce nuclear bombs, if you desire to do so.  More on that in a bit.

Politically and culturally the nation is both Shiite and Sunni Muslim, with some Christian presence.  There are also Kurds and Armenians in the nation from an ethnic perspective, none of which really like one another.  The Assad regime, which is both dictatorial and brutal in its enforcement of "peace" (on its terms of course) has managed to more-or-less keep a pressure-cooker from exploding - until recently.

The so-called "Arab Spring" is often blamed for the ignition of what is happening in Syria today.  There is a decent case to be made that this was what emboldened people to rise, but the fact of the matter is that economic conditions along with state-initiated violence and dictatorship were the ingredients that led to civil war breaking out. And we are largely responsible for the economic conditions.

The United States, along with the rest of the "developed" western world, has for 30 years run a policy of exporting our expansionary credit policy into other nations.  That is, we have exported to them the bad effects of this policy, which would otherwise have resulted in immediate and ruinous inflation, choking off the ability of our bankers and governments to run this scheme.  Instead we foisted it off through our balance of trade and in particular our energy dependence on Middle East oil to other places in the world.  China, India and the rest of the emerging markets got the "consumer goods" cost-push of our expansionary credit, while the Middle East got the oil side.

This has had the effect of impoverishing the people in these nations.  China, for its part, tried to compensate by blowing its own credit bubble and building cities with no people in them.  India, which has a large current account imbalance couldn't get away with that and now is suffering a massive collapse in their investment climate and currency, as their "miracle" of cheap labor for call centers and similar "enterprises" pops.

The Arab world managed to stave off what has been a thousand year conflict over religious differences with oil pumping and showering the trade imbalance dollars upon their people - for some.  That has also allowed the more-dictatorial regimes the funding necessary to repress opposition and maintain dictatorial rule - after all, killing people may seem cheap but managing to keep the mass of the population from rioting and burning you out of your palace can be a bit more expensive.

The United States could have resolved most of this after WWII by going down an energy path that actually made sense, including the use of Thorium as a nuclear fuel.  Had we done so, or if we were to do so today we would, within a decade, be entirely independent of outside energy resources and have a stable base of energy, both in liquid form (e.g. gasoline, diesel fuel and similar) and electricity for the next thousand years.

But that path does not allow for the "side effect" of producing nuclear weapons from the same dual-use technology, and that would have exposed the full cost of producing and maintaining those weapons to the people, instead of hiding a good part of it in both civilian nuclear power and naval propulsion.

In addition from the 1980s forward we discovered the "free" view of manipulating the economic cycle by encouraging credit expansion and then bailing out those who got too far over their skis.  This has been going on for 30 years but in the last few it has reached its logical terminus and the "benign" appearance of these policies has been exposed as a fraud.  Now "QE" and other "support" programs, instead of being soaked up by cheap energy exports from the Middle East, are translating directly into out-of-control increases in the cost of living in those other nations. Empty stomachs, collapsing standards of living and rampant unemployment make for easily-incited populations.

We have absolutely no business "intervening" in Syria.  We also have absolutely no business arming Jihadists, but the evidence is that Barack Obama's administration has been doing exactly that.  There is in fact a clean argument to be made that The United States government is itself a material supporter of Islamic Terrorism through the provision of both money and the provision of weapons to those who would and have used them against civilian populations in acts of terrorism (what else would you call burning a Christian church with Christians inside?)

The proper thing for us to do is to stop acting like jackasses and abusing our standing when it comes trying to swing the entire world around by the tail economically, force Bernanke to cut the crap and cease the lies about production, cost of living and credit inflation.  In short, admit to this in public:

That's not particularly likely, however - at least not voluntarily.  It's particularly true when you see the sort of academic stupidity that was on display at Jackson Hole this last week, which I will get to in a different Ticker.  In short the premise of Central Bankers has been laid forth on the table for all to see - they claim for themselves the fruits of technological advancement, rather than letting those who actually earned it keep it - that would be you.

It is indeed that very premise that keeps their schemes alive and anything that threatens it is to be opposed - by violence if it becomes necessary. Well, it's now "necessary" because the limits of doing it the other way (by persuasion in attempting to get people to voluntarily turn themselves into debt slaves) have been reached.

Obama and his ilk would be wise to stay out of this and instead plot a course that allows us to withdraw from that part of the world entirely - economically, politically and socially - leaving them to find their own way.  They could do so through the same technologies we can exploit here, and become both energy independent without the need for oil exports as well as resolving much of their issue with fresh water, which is of course a huge problem in that part of the world. Or, we can keep screwing around until one of the folks with nuclear weapons pokes one of the other ones in the balls, perhaps by accident and perhaps not, and we wind up with a rapidly-spreading war we cannot contain. I prefer not to glow in the dark. How about you?”
- http://market-ticker.org/
●
Oil and natural gas pipelines, folks, same as always, money. You didn't really
think this was any different, did you? Always, always, follow the money...
- CP
Posted by CoyotePrime at 1:33 AM