"Fukushima Crisis Continues to Spiral With Hole in Radiation Barrier" 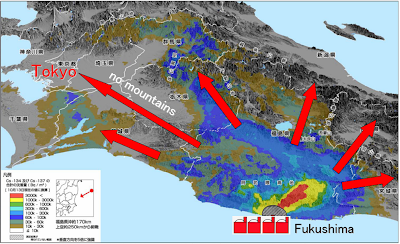 "In the latest in a series of mishaps to hit the crisis-stricken Fukushima nuclear power plant, a radiation-stopping "fence" around the reactors has developed a hole, plant operator TEPCO admitted on Thursday. Fences made of earth and sand sit in the harbor next to the plant and were erected to help contain radioactive material from flowing into the ocean. They "are suspended from floats and anchored with weights on the seafloor," the Japan Times explains. One of the fences that sits next to still-intact reactors five and six was found to be breached, sparking further worry about the amount of radioactive contamination heading into the ocean.

TEPCO has struggled to contain the "emergency without end" at Fukushima since the disaster began to unfold in March of 2011. An unsustainable contaminated water-storage system plagued by a series of leaks, soaring radiation levels in groundwater that head into the ocean, and high levels of radiation found in fish have catalyzed widespread resistance to nuclear power and raised international alarm.

As out of control as the situation seems, one expert has warned that it may actually be "much worse" than claimed.  Also, long-time anti-nuclear activist Harvey Wasserman warned last week that a plan to "remove more than 1300 spent fuel rods from a badly damaged pool perched 100 feet in the air" risked putting the "hand of global nuclear disaster... painfully close to midnight."
- http://www.commondreams.org/
•
“Nuclear Experts: Fukushima Unit 4 Has Shown Signs of Collapsing”
By ENENews

“Tepco’s video tour of Fukushima Daiichi nuclear power plant, Sept. 2013 (At 1:00 in) – The power line tower of units 5 & 6 fell over due to a collapse of the embankment. Consequently, the whole site lost its outside power source. 20-minute video here.

WERU’s News Report interviews Dean Wilkie, nuclear reactor operations at a U.S. Department of Energy test reactor in Idaho (At 28:50 in) – When the accident happened back in March 2011 there was a power pole, one of these huge power poles, inside of the Daiichi facility, inside the area there, and the ground that it was set on became super-saturated with water and they had a mud slide and that whole tower went down […] At Fukushima now, what we’re seeing, all of this work that they’ve been doing with these walls and then it’s causing the water to back up, it’s starting to saturate soil that’s underneath the buildings and in adjacent areas around the buildings. Couple that with the fact that there are known fractures in that soil — it was very obvious during the earthquake.  Full broadcast here.

Nuclear Expert Gordon Edwards interview on the Green Power Wellness Show (At 32:00 in) – The worry with Unit No. 4, even though there was no fuel in the core of the reactor, there’s a spent fuel pool very precariously perched up above 5 floors. If the plant were to collapse — which it’s been showing signs of doing — then that fuel would be all over the place and it would be impossible to cool. And that would be a real… you could get far greater emissions than we did initially. Full interview here.

See also: Yale Professor: Fukushima Unit 4 pool in perilous condition : "All of humanity will be threatened for thousands of years" if not able to be kept cool; Danger of collapse during storm or while attempting removal of fuel rods."
- http://enenews.com/
•

“Much more serious is the danger that the spent fuel rod pool at the top of the nuclear plant number four will collapse in a storm or an earthquake, or in a failed attempt to carefully remove each of the 1,535 rods and safely transport them to the common storage pool 50 meters away. Conditions in the unit 4 pool, 100 feet from the ground, are perilous, and if any two of the rods touch it could cause a nuclear reaction that would be uncontrollable. The radiation emitted from all these rods, if they are not continually cool and kept separate, would require the evacuation of surrounding areas including Tokyo. Because of the radiation at the site the 6,375 rods in the common storage pool could not be continuously cooled; they would fission and all of humanity will be threatened, for thousands of years.”
- http://www.huffingtonpost.com/
Posted by CoyotePrime at 6:38 PM