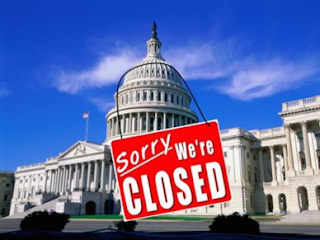 “Congressional Republicans have gone directly from conservatism to fanaticism without any intervening period of sanity. First, John Boehner, bowing to Republican extremists, ushers a bill through the House that continues to fund the government after September 30 but doesn't fund the Affordable Care Act. Anyone with half a brain knows Senate Democrats and the president won't accept this- which means, if House Republicans stick to their guns, a government shut-down.

A shutdown would be crippling. Soldiers would get IOUs instead of paychecks. Hundreds of thousands of federal employees would be furloughed without pay. National parks would close. Millions of Americans would feel the effects. And who will get blamed?

House Republicans think the public hates the Affordable Care Act (Obamacare) so much they'll support their tactics. But the fact is, regardless of Americans' attitudes toward that Act- which, not incidentally, passed both houses of Congress and was signed into law by the president, who was re-elected with over 50 percent of the vote, and constitutionality was upheld by the Supreme Court- Americans hate even more one party using the United States government as a pawn in their power games.

According to a recent CNN poll, 51 percent of Americans say they'd blame the Republicans for a shutdown; 33 percent would blame the president. They blamed Republicans for the last shutdown at the end of 1995 and start of 1996- contributing to Republican losses of seven out of 11 gubernatorial races in 1996, 53 state legislative seats, 3 House seats, and the presidency.

So what are Senate Republicans doing about this impending train wreck for the country and the GOP? Senator Ted Cruz is now trying to round up 40 Senate Republicans to vote against- not for, but against- the House bill when it comes to the Senate floor next week. Why? Because Cruz and company don't want the Senate to enact any funding bill at all. That's because once any bill is enacted, Senate Democrats can then amend it with only 51 votes- striking out the measure that de-funds Obamacare, and even possibly increasing funds in the continuing resolution to keep the government running.

So if Ted Cruz gets his way and the Senate doesn't vote out any funding bill at all, what happens? The government runs out of money September 30. That spells shutdown.

In truth, the fanatics now calling the shots in the Republican Party don't really care what the public thinks because they're too busy worrying about even more extremist right-wing challengers in their next primary- courtesy of gerrymandering by Republican state legislators, and big-spending right-wing gonzo groups like the Club for Growth.

The Republican Party is no longer capable of governing the nation. It's now a fanatical group run out of right-wing states by a cadre of nihilists, Know-nothings, and a handful of billionaires. But America needs two parties both capable of governing the nation. We cannot do with just one. The upcoming shutdowns and possible defaults are just symptoms of this deeper malady.”
- http://www.huffingtonpost.com/
•
Nothing better to do, you idiots?
“Republicans Block Science Laureate Vote Over Fear of Climate Stance”
- http://www.alternet.org/

Pardon me, my bias against absolute morons is showing...
- CP
Posted by CoyotePrime at 2:26 AM