"The Oyster and the Cormorant" 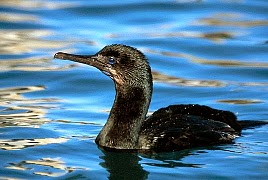 "The Oyster and the Cormorant"
by CoyotePrime
.
“Brandt's Cormorants feed either singly or in flocks, and are adaptable in prey choice and undersea habitat. It feeds on small fish from the surface to sea floor, obtaining them, like all cormorants, by pursuit diving using its feet for propulsion. Prey is often what is most common: in central California, rockfish from the genus Sebastes is the most commonly taken, but off British Columbia, it is Pacific Herring. Brandt's Cormorant have been observed foraging at depths of over 40 feet.”-WikiPedia

Westport is a small fishing town on the western coast of Washington, a place we visited for fishing from their public dock. Pelicans, terns, sea gulls and many other birds are abundant there. My favorite was the cormorant, a sleek bird known for diving like an arrow into the water to catch its prey. One sunny afternoon we saw a strange sight among the many Brandt’s cormorants floating near the rock jetty. One apparently had something large stuck to its beak, and was in distress. Walking closer, we saw to our horror that it was really a very large oyster, encrusted with barnacles, which must have weighed several pounds. The cormorant, while diving for food, had obviously poked his beak into the oysters shell, which the oyster promptly closed, trapping them both in a death grip. Despite the cormorants frantic efforts at removing the oyster it remained firmly in place. Barely able to breathe, the effort to keep the oysters weight from pulling him underwater was rapidly exhausting the bird. Desperately he pulled his head above water, trying to catch a breath, until the weight of the oyster slowly pulled his head back under. Helpless, all we could do was watch as the birds head was gradually pulled beneath the surface for longer periods of time, until finally they both disappeared beneath the waves.

This made me wonder what “oysters” many of us invisibly carry around, the possessions or experiences we “REALLY” believe we must have or possess, which turn out to harm us in the long run: debt stress from the house and new car; job problems; health problems; relationship problems; family problems; losses of all kinds, all adding to the weight of the “oyster” attempting to drown us. Are they really worth it? What’s YOUR oyster made of? Can you safely remove it before it drowns you?
Posted by CoyotePrime at 2:43 PM