“Americans Have Become a ‘Slave Race’" 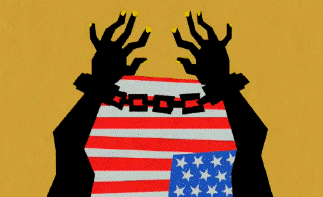 “Americans Have Become a ‘Slave Race’"
by Bill Bonner

“We went down to the town of Cafayate last week from the family ranch: a three-hour drive, mostly over unpaved roads. There, old friends Doug Casey and John Mauldin were holding forth. The "deep state," among other things, was their topic. "The term comes from Turkey," Doug explained. "People noticed that there was the government – you know the government that they teach you about in school. And there was a deeper, more important and more powerful government. It was not described in any constitution. The newspapers didn't report on it. To most people it was largely invisible. But it was how the country was really governed."

In a nutshell, Doug – along with many others – believes a "deep state" has taken over the US. "The War Between the States was the largest and bloodiest war the US has ever had," Doug continued. "Practically the entire country was mobilized, with a greater proportion of men in uniform than ever before or ever since. But after the war was over the soldiers went home. The army was miniscule. And things went back to normal. Same thing after World War I. But after World War II things started to change. Gradually, more and more of America's resources were going to the military on a permanent basis, even though there really wasn't any war worth talking about."

The Deep State Takes Over: To look at it another way, after World War II the return on investment in the military sector fell. Why? Because there was no one worth fighting. There were no real challenges to the US... except the Soviet Union, which turned out to be a hollow threat. Then in 1989, the Soviet Union disappeared. But US spending on "security" hardly slowed down at all. After the 1980s, the US was taken over by "deep state" interests, which used "security" to justify huge transfers of power and money from the public to themselves.

"You know, France had a deep state experience too," Elizabeth volunteered on our drive home. "During the Revolution, it had secret political committees, a parallel army and a whole apparatus for controlling people. The revolutionaries used terror... including the idea that the country was full of spies... to keep the public alarmed and afraid. It was a bit like what we see in the US with all its secret agencies and Code Red alarms... and the ‘see something, say something' campaign. They're all designed to keep the public worried... and keep it lined up behind the state."

It did not come up in our conversation in Cafayate, but there's more to the deep state than the military. Informal, largely hidden power arrangements exist in all major industries – particularly health, education and finance. Every detail in these industries is closely regulated to prevent innovation and competition.

We've reported on the high percentage of retired generals who take up cushy jobs in the defense industry. But health-care researchers, "educators" and Wall Street's hot shots routinely pass between government, think tanks and private enterprises... trading information, favors and pay-offs. Witness Tim Geithner. He bailed out Wall Street. (The total cost is now estimated at $10 trillion, including the Fed's assistance.) Surprise, surprise! Now, he is a partner in one of Wall Street's private equity firms. In all these industries, the return on investment approaches zero... or is already negative. Still, the deep state insists that more and more resources go to them.

The Great Deformation: David Stockman knows this better than anyone. He was part of the federal apparatus, as President Reagan's budget director. Then he went to Wall Street... where he, too, was a partner in a private equity firm. He watched as the country was taken over by deep-state institutions... financed with borrowed money and with one major goal: to look out for themselves.

Stockman calls the transformation of US society the "Great Deformation." It's what happens when capitalism is corrupted by the government... and is perverted by deep-state institutions. "The deep state," Doug elaborated, "includes dozens and dozens of agencies that we're not supposed to know anything about. It includes a million people with CIA security clearances. There are people at the lowest level who frisk you at airports... and at the highest levels who make millions of dollars by providing contract services to the government."

Armed with intimate details about everyone's personal life, the deep state protects itself. What politician will challenge the NSA budget, knowing that the agency could wreck his career? Who is above reproach? And who is so saintly that a devil couldn't touch him?

"Americans, for the most part, submit willingly," Doug went on. "That is the most astonishing thing. Americans have become a slave race, ready to go along with anything the deep state asks for."
- http://www.thedailyreckoning.com
Posted by CoyotePrime at 9:42 AM