“Fukushima Equals 6,000 Hiroshima Bombs Today, More Tomorrow; There is No Place On Earth to Escape the Rad” 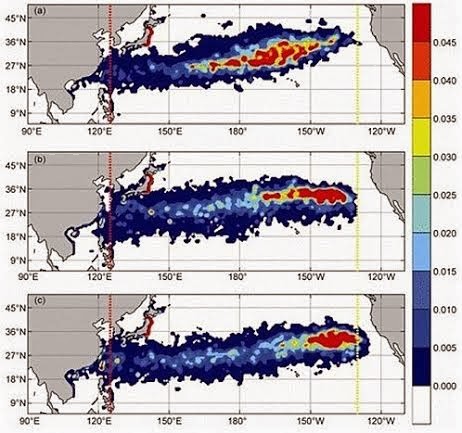 “Fukushima Equals 6,000 Hiroshima Bombs Today, More Tomorrow;
There is No Place On Earth to Escape the Rad”
by Bob Nichols, “Veterans Today”

First thing, grasp the difficult concept that this is an ELE or Extinction Level Event. There is no escaping our fate, there are no solutions.

We can extend our lives somewhat, though. These steps are personal. People can do them or not. You will die quicker, or later, your choice.
1. Take off your shoes and outer ware (coats) when you enter your place.
2. Stay under a protective Roof as much as possible.
3. Filter your water.
Bonus: Eat foods as low on the food chain as possible that are thought to be less radioactive and eat electrically negatively charged foods each day.

Several people who have heard about Fukushima since the early days are puzzled that so many are “still alive”. Others, in addition to the psychopaths who apparently believe themselves to be immune from radiation poisoning, are those of the EXTEND AND PRETEND strongholds of delusions and galactic thought, along with the ‘end of times’ crowd expecting clouds to part and higher beings to ride in and ‘save us’.” You are going to have to make your own choices. You will live a little longer, or, die sooner by these choices, as will I. No one is exempt. The radioactive particles are all over the world now.

What’s next?  Friends, virtual and non-virtually, have said and asked things like:

Question: In basic math terms, in comparison to Nagasaki, how much worse is Fukushima and why?
Answer: The Nagasaki Bomb was slightly larger; therefore Fukushima equals slightly fewer Nagasaki  Bombs. However, at this point, it makes no difference.

Question:  In basic math terms, in comparison to Chernobyl, how much worse is Fukushima and why?
Answer: At 916 days of growth Fukushima is 14.75 Times bigger than the Chernobyl atomic disaster in 1986. The International Atomic Agency (IAEA) stated: “The accident at Chernobyl was approximately 400 times more potent than the atomic bomb dropped on Hiroshima…” Fukushima so far is 14.75 Times worse than Chernobyl and growing.

Question: In basic non-scientific language, what causes this to be an ELE, Extinction Level Event, and is there any shot at it being reversible?
Answer: Throughout the time humans lived on Earth, humanity has never experienced radiation this high. The radiation and its associated Lethality is very high and will kill everybody. The Radiation’s Lethality will last well past the end of every one’s lifetime. No, there is no shot at reversing the effects and every human on Earth is included.

Question: How long before we are tripping and stumbling over dead-dying bodies?
Answer: In a sense we already are. Human fetuses are the first to die and are typically cremated at the hospital. We just don’t see them. Women, children, already sick people and the elderly infirm are next. Middle aged men are last.

Question: Anything you recommend to lengthen ‘shortened-life spans’?
Answer: No.

Question: Any resources you would direct interested people to?
Answer: No.

Question:  What other questions must be asked when confronted with an Extinction Level Event, and why have any hope whatsoever?”
Answer: Ask what is the published lethality of all of the released isotopes and do not let the Empire paid trolls fool you by using radioactivity numbers; it is the LETHALITY that counts. When you find the numbers for the two Cesium Twins multiply by 14 for the total radiation in a single release from an active reactor core. Multiply the combined Cesium137/134 radioactivity numbers by 5 for the total radioactivity in a single release for old fuel rods. Those will give you a rough idea of the radiation released for that instance. As for “hope,” that is fine, knock yourself out."
- http://www.veteranstoday.com/
◆
Sources and Notes:
1. AIPRI, Thursday, September 5, 2013, “The Bitter Waters of Fukushima Daiichi, by Dr Paolo Scampa, Physicist. AIPI was founded in 1993. The bitter waters of Fukushima-Daiichi. (II)
This is a simple theoretical calculation based on two public data sets 1) 300 m3  groundwater have passed through the Fukushima to leak at sea every day for two and a half years, the other, 2) according to information provided by Kurion that water from the plant is loaded with Cs-137  up to 2 million Bq per milliliter. The product of these two factors gives chills…” http://aipri.blogspot.com/
2. “Frequently Asked Chernobyl Questions,” Copyright©, International Atomic Energy Agency, Vienna International Centre, “The accident at Chernobyl was approximately 400 times more potent than the atomic bomb dropped on Hiroshima,” http://www.iaea.org/
◆
“It’s even worse that CNN has reported, a horrific equivalent of radiation equal to 10 Hiroshima’s an hour 24/7 has been pumped into seas for since 3.11.13. That’s equal to about 8,700 Hiroshima’s. Is it any wonder our world is dying? What the Fukushima?!”
Posted by CoyotePrime at 4:38 PM