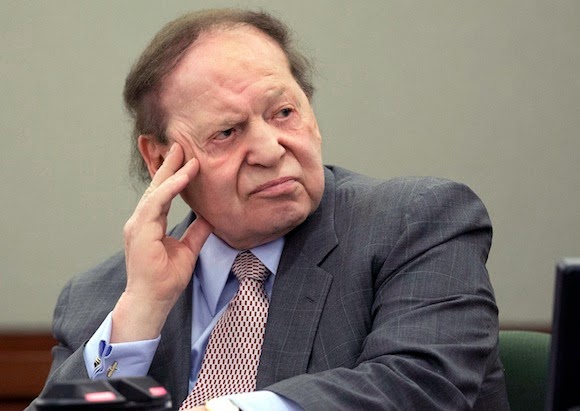 LAS VEGAS (The Borowitz Report)— “The casino billionaire and Republican kingmaker Sheldon Adelson met several 2016 G.O.P. candidates available for purchase over the weekend, but decided to buy none of them, Adelson confirmed today. After hearing speeches by Kentucky Senator Rand Paul, New Jersey Governor Chris Christie, former Florida Governor Jeb Bush, and several others who were for sale, Mr. Adelson concluded that none of them are worth owning. “I don’t want to spend millions on another loser,” said Adelson, who purchased both Newt Gingrich and Mitt Romney in 2012.

The casino magnate was scathing in his assessment of the candidates he declined to buy, calling them “a third-rate grab bag of has-beens and dimwits.” “I guess the Republican Party is thinking, Here comes crazy old Sheldon, he’ll blow his money on the first washed-out wingnut we throw out there,” Adelson said. “Well, guess again.”

Posted by CoyotePrime at 9:05 AM