“Today is Earth Day, a worldwide celebration of our home planet. I know you’ll be hearing a lot of talk about the environment today, humanity’s global impact, and more … which is great, and I wholly support that conversation (obviously). But as an astronomer and science dork, I do love me some fun factoids. So I gathered together/calculated a few to give you a better appreciation of our planet’s place in the Universe. You might want to check out the ones I posted last year, too. You can’t know too much about Earth. 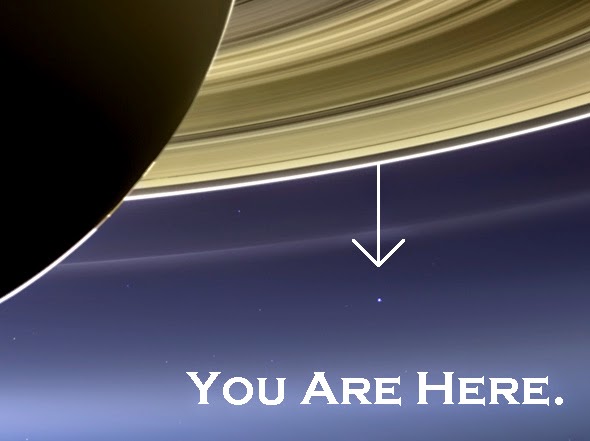 The Earth as seen from Saturn is a reminder:
The Universe is big, and we are not. Happy Earth Day!

1) Earth Day is April 22 every year. On average (jumping over leap years and such), between subsequent Earth Days our planet moves about 940 million kilometers (580 million miles), the circumference of its orbit around the Sun. That means it’s faster—way faster—than a speeding bullet: about 30 km/sec (18 miles/sec)! Typical rifle bullets travel 1-2 km/sec, so the Earth outpaces them handily.

[UPDATE (Apr. 22 at 18:00 UTC): I'm getting some comments about this, mostly referring to how I measure that speed. Implicit in my words is that I meant relative to the Sun, so that's how quickly the Earth would move around the Sun. In general, the speed of the Earth (or anything) depends on what you're measuring its speed against. Since I'm on Earth, it's not moving at all relative to me, and if you're in a distant galaxy we're moving away at a large fraction (or even faster than) the speed of light. All motion is relative... you can quote me on that!]

3) The Earth is the biggest of the terrestrial (rocky, as opposed to Jupiter-like gas giant) planets in our solar system.

4) Venus, the closest planet in the solar system to Earth’s size, has a diameter of 12,104 km (7,504 miles), 95 percent the width of Earth. It has about 82 percent the mass of Earth, too, making it our twin. However, its thick atmosphere is mostly carbon dioxide, it rains sulfuric acid, the air pressure on its surface is 90 times Earth’s, and the average temperature is a lead-melting 460 C (860 F). So it’s more like our evil twin.

5) Nearly 2,000 confirmed exoplanets (worlds orbiting other stars) have been found so far. The smallest, Kepler-37b, is barely bigger than our own Moon! Another, KOI-314c, has the same mass as Earth but is so hot it’s puffy, with a huge atmosphere. The planet that has the best chance of being most like Earth is Kepler-186f, which has 1.1 times the Earth’s diameter and is the right distance from its star to have liquid water. We really don’t know what it’s like beyond that, though. It might be more like Venus, or Mars.

6) We’ve only just started looking for other planets, though. There may be billions of Earth-size planets in our galaxy alone.

7) Coming back home again, Earth has something no other planet we know of has: a lot of water on the surface. It’s about 71 percent water by area, dominated by the Pacific Ocean, which covers a staggering 155.6 million square km (60 million square miles) of the surface. That’s nearly a third of the planet.

9) Water exists naturally in all three physical states on Earth’s surface: solid (ice), liquid, and gas (water vapor). Due to a peculiar property of water—called its triple point—it can even exist in all three states at the same location and time. So now when things go wrong, you can say, “Well it could be worse: It could be raining and snowing and steaming!”

10) The more we look, both in our neighborhood and in deep space, the more we find that our Earth is one-of-a-kind. Even if we do eventually spot those billions of other planets similar in size to Earth, it’s unlikely they will be just like ours, with our exact balance of chemistry, temperature, and life. Heck, in the distant past the Earth didn’t look like it does now, and it’s the same planet.

What this tells us is that what we have now is precious, unique, and vital to us and ours. We don’t have an emergency backup, a summer home, a spot we can retreat to. The Earth is all we’ve got. We need to treat it that way.”
- http://www.slate.com/
Posted by CoyotePrime at 3:09 PM