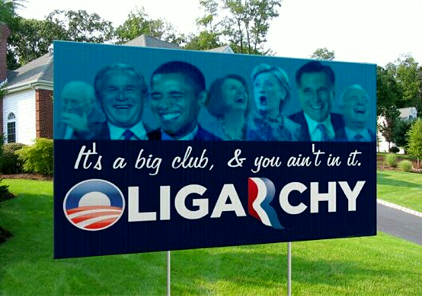 "An Inconvenient Truth"
by Karl Denninger

"We're better than those damned Russians and their Putin; we have democracy! Well, maybe not. "Multivariate analysis indicates that economic elites and organized groups representing business interests have substantial independent impacts on U.S. government policy, while average citizens and mass-based interest groups have little or no independent influence. The results provide substantial support for theories of Economic Elite Domination and for theories of Biased Pluralism, but not for theories of Majoritarian Electoral Democracy or Majoritarian Pluralism."

Lots of big words in that paragraph. Let's distill it down - the argument presented is that America is really no different than Russia; that actual democratic forces, that is, the expression of will by the people, for the people is a chimera and has no actual effect or impact on policy.

However, the 0.01% do; they set policy and then create a shimmer of "belief" that you actually have a voice. Just like Russia does. You think not? Then explain the following:

How is it that it can be illegal, with felony prison time attached, for you to buy a drug manufactured in Mexico and bring it back to the United States for resale? This prohibition is the only reason that scorpion antivenom sells for $30,000 a vial here and $100 in Mexico, where it is made and where you can buy it over the counter. Likewise it is the same set of laws that allows Gilead to charge $84,000 for a course of treatment that they sell in other nations for $900 while prohibiting you from buying it for $900 and reselling it here in the US. This sort of conduct would be punished as flat-out unlawful in an actual society that honored the rule of law and the principle that all are equal. Instead our nation will imprison you should you try to break that monopoly using nothing other than your own money to buy and willing customers to sell said products to.

How is it that universities and industry can collude to effectively force attendance at their schools in order to enter various fields instead of simply testing for competence?  Specifically you cannot even sit for a bar exam without attending law school in person, among other fields. Yet you may have all of the skills necessary to be an attorney and you may have acquired them through various means. The same is true of many other disciplines. On top of that both universities and banking interests have managed to reclassify loans for education as "special" and therefore unable to be discharged in bankruptcy, thereby protecting the price of their service. All of this has served to drive post-secondary educational costs up 600% compared against minimum wage jobs over the last 30 years, rendering it flatly impossible to work your way through school - a path that used to be available to literally anyone who could pass the coursework.

Want to make cars? You must allow a cartel of middlemen to sell and service them. Yes, Tesla got a "limited exemption" in some states (but not others), but it only applies to them! Gee, you don't think the money and influence that Tesla's founder has might be involved in that? What part of a free market prohibits the entry and exit of various manufacturers of vehicles "at will" with different sales and service economic models, all of which should be competing for market share?

How close are we to minting another Hitler or Stalin?  Many think Putin is one.  Better look closer to home; specifically in NYC. What sort of hubris do you have to have to believe that you're entitled to entry to heaven? Especially when that same "entitlement" comes from your belief that you should be able to carry a weapon for self-defense and pay others to do so on your behalf (up to and including taking a bullet in the chest in your place) but ordinary people should be barred as a matter of law from doing so and sent to prison if they refuse to consent to being violent crime victims unable to defend themselves from the myriad thugs that are unfortunately present in all societies. Maybe - just maybe - such hubris comes with an expectation that if you succeed in your quest you might be the guy directing who goes into the boxcars - and ultimately the "showers"?

Take a read of that Princeton paper. I'm not much of a fan of that particular college, but once in a while even a blind squirrel finds a nut. Or, in this case, maybe they've identified and called out a whole bunch of nuts.”