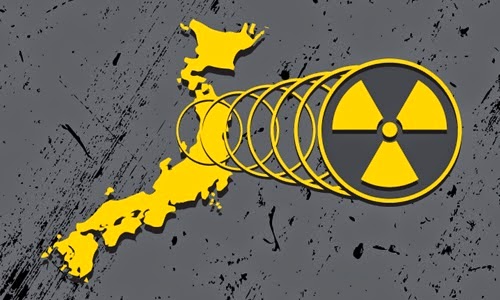 "Fukushima Didn’t Just Suffer 3 Meltdowns,
It Also Suffered Melt-THROUGHS and Melt-OUTS"
The Nuclear Core Has Finally Been Found…Scattered All Over Japan
by WashingtonsBlog

"We reported in May 2011 that authorities knew – within days or weeks – that all 3 active Fukushima nuclear reactors had melted down, but covered up that fact for months.

The next month, we reported that Fukushima’s reactors had actually suffered something much worse: nuclear melt-throughs, where the nuclear fuel melted through the containment vessels and into the ground. At the time, this was described as: "The worst possibility in a nuclear accident." But now, it turns out that some of the Fukushima reactors have suffered even a more extreme type of damage: melt-OUTS. By way of background, we’ve noted periodically that scientists have no idea where the cores of the nuclear reactors are.

Indeed, “hot particles” with extremely high levels of radiation – 7 billion, 40 billion , and even 40 billion billion Bq/kg – have been found all over the Fukushima region, and hundreds of miles away, in Tokyo.

Let’s put this in perspective. The Atlantic notes: "Japanese regulations required nuclear waste with 100 or more bq/kg of Cesium to be monitored and disposed of in specialized containers." The new government limit for material headed for landfills is 8000 bq/kg, 80 times the pre-Fukushima limit.

So the hottest hot particle found so far is 5 million billion times greater than the current government limits of what can be put in a landfill. In other words, the core of at least one of the Fukushima reactors has finally been found, scattered all over Japan. How did material from the cores get dispersed so far? Remember, there was a huge explosion at reactor number 1, and an even bigger explosion at reactor number 3."
- http://www.washingtonsblog.com/
◆
A comment: They've intentionally lied all along about this, folks, in every way. Do you realize what this really is? There are 3 totally melted-through reactor cores that have burrowed into the earth and have impacted ground water from the Pacific Ocean, each "burning" at 5,700 degrees F, and will do so for thousands of years, spewing radioactivity into the ocean and atmosphere. Add the over 300 tons per day of water being used to flush/cool what's left of the reactors, and which then drains, highly radioactive, into the ocean. One study claims that the entire Pacific Ocean, every cubic foot, will have 120 times the normal background radiation. Life as we know it cannot survive that degree of radiation. Of course the winds and ocean currents will carry this poison to the entire planet. Additionally, a total of over 11,000 highly radioactive spent fuel rods are on the site, subject to earthquakes which will add them to the molten cores below ground. This is an extinction level event for mankind, Doomsday in slow motion. There is no known technology to deal with this situation- the only solution at the time this began was to nuke the site, wipe it out completely. We, humanity, would have taken a tremendous hit but survived. Of course that didn't happen, and it's too late now. This isn't melodrama, it's my own conclusion based on all I've learned, and I wish desperately to be proven wrong. Please, don't believe me, research it for yourself and form your own conclusions. Do a Search of this blog, there are many posts about Fukushima here. God forgive us for what we've done, to ourselves, and to this beautiful world... - CP
Posted by CoyotePrime at 1:42 PM