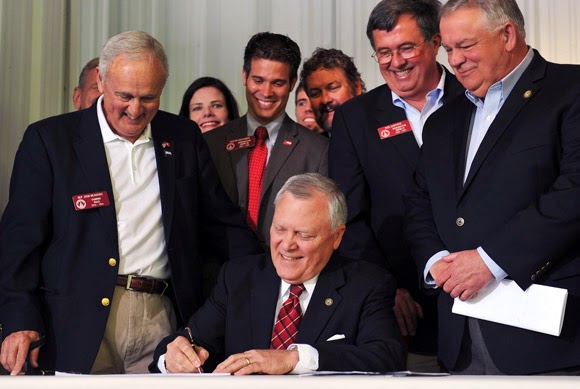 ATLANTA (The Borowitz Report)— "Flanked by members of his state’s legislature on Wednesday afternoon, Georgia Governor Nathan Deal proudly unveiled Georgia’s new official state slogan, “We Make Florida Look Safe.” Gov. Deal told reporters that the slogan was “more than just words,” reflecting Georgia’s determination to best its rival Florida for the nation’s most reckless gun law. “When Florida passed Stand Your Ground, we knew we were playing catch-up,” Gov. Deal said. “Thanks to the fine men and women in the Georgia state legislature, we’re No. 1.”

Gov. Deal said he hoped that the state’s newly enacted Safe Carry Protection Act, which makes it legal to carry guns in bars, schools, churches, and some government buildings, would send the message that Georgia was taking its competition with Florida “very, very seriously. In recent years, if you wanted to fire off a gun any damn place you pleased, there was a sense that Florida was the state for you,” he said. “We’re hoping to change that perception.”
- http://www.newyorker.com/
Posted by CoyotePrime at 4:45 PM