"The Breton Fisherman's Prayer: On Destroying What We Love"

"The Breton Fisherman's Prayer:
On Destroying What We Love"
by Robert C. Koehler 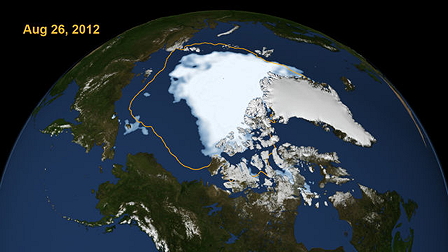 “Oh God, thy sea is so great and my boat is so small.”

"The Arctic ice is melting at a record pace this summer — just one more measurable phenomenon indicating that extraordinary change in the global ecosystem is in progress. As the ice melts, and the vast polar reflecting surface diminishes, the planet absorbs more and more of the sun’s energy and... grows warmer. More ice melts.

So what? Sitting at my desk in Chicago, I was tempted to opt out of caring about this — trend Republican, you might say. Put it on the back, ahem, burner. It takes a leap of consciousness to align my own well-being with the fate of the Arctic ice, the ocean, the Inuits, the polar bears.

I’ve lived my life pretty much within the gated community of the American middle class, sheltered, more or less, not just from poverty but from the challenges of weather and basic physical survival. I have lived within the bubble of a functioning economy and have been able to take the ecosystem that surrounds it for granted. No elders or teachers out of my childhood ever guided me toward awareness that I have a direct relationship with that ecosystem, and that I can act toward it either with reverence or abusive indifference. Indeed, the economy that sustained me was based on abusive indifference, which, ipso facto, was a good thing. We were winning, exercising the human mandate to “have dominion over the fish of the sea and over the birds of the heavens and over every living thing that moves on the earth.”

Oh limited world view! I understand it all too well. So what if the Arctic ice cover is turning, in the words of a research scientist with the U.S. National Snow and Ice Data Center, into “a giant slushie”? So what if human beings, endlessly spewing greenhouse gases into the atmosphere, are largely responsible? I can understand the inability to care about this. It’s simply beyond reckoning. “There are no comparisons to be made,” George Monbiot writes this week in The Guardian/UK. The melting Arctic ice “is not like war or plague or a stockmarket crash. We are ill-equipped, historically and psychologically, to understand it, which is one of the reasons why so many refuse to accept that it is happening.”

“Oh God, thy sea is so great . . .” At some point, as I pondered all this, a memory ripped loose from my boyhood. I thought about the Breton Fisherman’s Prayer, inscribed on a wall plaque. It hung on the wall of a cottage on Lake Erie, owned by friends of my parents, which we visited every summer. The piercing simplicity of the prayer’s surrender, not to some theological abstraction but to the vast encircling natural world, beguiled and unnerved me. I wanted there to be more — something instructional, perhaps — but that was it. It hung in my heart like a Zen koan. It defined reverence.

And the hurricane-haunted Republican National Convention convenes in Tampa. “The Republican platform slated for approval at the party’s convention,” writes Ben Geman in The Hill, “includes expanded offshore oil-and-gas development, opening Alaska’s Arctic National Wildlife Refuge to drilling rigs and thwarting Environmental Protection Agency climate change regulations.” Such a platform is no less arrogant than the Russian energy giant Gazprom’s Prirazlomnaya oil platform in the Pechora Sea, which Greenpeace activists occupied for 15 hours last week, enduring, among other things, water cannon blasts that almost swept them into the frigid waters. “And so I write to you today,” explained Kumi Naidoo after the occupation had ended, “not as the executive director of Greenpeace International, but as one of a team of activists who stood up to say No to a Russian oil giant determined to destroy our fragile Arctic.”

What’s fragile are the complex environmental conditions that make life — human and otherwise — possible. To recognize this fragility is to recognize our own fragility. Perhaps, in a technological sense, we have “outgrown” the Breton Fisherman’s Prayer. The ocean is no longer so vast that we can’t cross it in a few hours. But our ability to do so has come at a serious cost, environmentally and, perhaps, spiritually.

The largest economic and political institutions we have thus far created — nations, multinational corporations — regard climate change primarily as opportunity. Suddenly they have access to a previously hidden part of the planet, to drill, fish, mine and otherwise exploit. In our pursuit of dominion over the seas and the heavens, have we lost the ability to love the planet that has sustained us? Do we love only our control over it?”
- http://www.commondreams.org/
Posted by CoyotePrime at 4:10 PM