“The Death Of Capital” 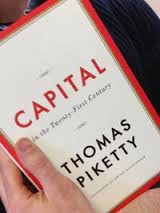 “The Death Of Capital”
by Andrew McKillop

“Elite Psychosis Again: Rather predictably, the elite-serving glove puppet media has decided it is right and good at this time to wheel on its handpicked, most obedient and servile journalists to opine about Piketty's new book “Capital”. This coincides with David Stockman's almost triumphant declaration of Greenspan-and-Bernanke's come-uppance Truth Moment (“America's Housing Fiasco Is On You, Alan Greenspan”).

Another 2008 crisis is not only possible, but probably overdue. Piketty contrasts the Victorian era of extreme and massive income equality with exactly the same thing today, finding that the only difference is that in the times of Thorsten Veblen the rich could pass on almost all their gotten-gains to their offspring, and perpetuate capitalism. Today, they have to share a lot too much with Big Government, which of course dilapidates these gotten-gains and, terribly unfortunately, economic growth bombs down to oblivion. Capital and growth are the bedrocks of our latter-day society and culture, or Mass Kultur.

Social Darwinism: The Victorian era-focus of Piketty is obligatory. In a very very short period  following the shock discovery in 1859, thanks to Charles Darwin, that humans are descended from apes and therefore also from reptiles, vertebrate fish, and invertebrates (even from bacteria!), Herbert Spencer had cobbled together his “Social Darwinism” theory, to massive applause from the elite.

Victorian middle class English society was descended, or rather ascended from the hapless “prolos” or animal-like proletariat too stupid to know about derivatives and FX trading. Worthless zombies, they were good for working the factories of David Ricardo, extracting capital from “comparative advantage”, and above all from the ability of paying one person 100-times less than another, that is the Captains of Industry. The worth premium is raised to 1000 times less when we take the late unlamented (to me) Steve Jobs or the unhappily still-present Bill Gates, and the post-2010 clones and clowns of latterday capitalism, for example the profiters of the marvelously absurd, reheated dotcom boom, such as the charlatan inventors of intrinsically worthless entities like Whats App and Facebook.

To be sure, to pay a person 1000 times less than another, the Born Losers have to crawl in poverty. That goes without saying, and Piketty only skims that part of the bad deal. The ethics and social philosophy, or moral dimension is of course usually avoided. That would ruin the “scientific economics” chart displays and the pompous gurgling. However, critics and commentators, usually outside the glove puppet media, have underscored the role and importance of “honest money”, and its opposite, unhonest money in trashing capitalism. There is something inherently dishonest in fractional banking – in fact it is a simple confidence trick.

Bizniss is bizniss however, and the Victorian elite of England sincerely wanted to feel morally righteous, to feel genuine pleasure and pride seeing their fellow citizens in the gutter, suffering repeated cholera epidemics in coal-smeared mega cities like Manchester and London. Herbert Spencer supplied them a nice line of lies and illusions!

By a happy coincidence, English capitalist imperialism soon enabled massive supplies of Chinese and Asian opium to be imported, to further befuddle the Hapless Prolos of England. The English imperial onslaught sucked in new capital from China. To be sure, the English airily “forgot all about it”, possibly helped by drug dependence, but the Chinese did not. Opium War has enduring meaning, to the Chinese.

Marx and Engels, for all their faults, at least explained that the capitalist predator class, once it has sucked all it can from its home-base population, will move on to Imperialism and try the same dirty trick on foreign nations and peoples. So doing, it stacks up blowback for later on. Today we have a minute-by-minute grope forward of Western neo-Imperialism in the Ukraine crisis, facing down “KGB-ruled Russia”, but trying the same neo-Imperialist trick against nuclear-armed China or India may run on a lot shorter time fuze. Enduring resentment against Western capitalist imperialism is intense, in China and India.

To be sure, capitalism heavily needs plenty of tricks and chance discoveries (called “innovation”) to stumble along, enriching the Nice People and trashing the Born Losers in the gutter. In particular, for at least 100 years, but with antecedents tracing back to John Law's “financial miracle” in the France of 1715, followed by the total collapse of his dirty and fundamentally dishonest scam, we have the moral dimension and question of honest money.

The Ruling Class Needs War: Dishonest money has its direct counterpart and dark twin in the urge to war. If “Vlad the Vampire” Putin can be unhinged and of course killed, like Saddam Hussein or Muammar Gaddafi, enormous riches will befall to the Good and the Brave. On the back of liberated Russian natural resources, the money printing presses can whirr even more frenetically! You can find that warm and progressive message in almost black-and-white print, in the elite glove puppet media of today.

The basic problem is that Piketty's “dilution of capital” is an inevitable process. Since the probable last or definitive crisis of modern capitalism, in 2008, economic growth was and is the first collateral victim. Ergo war is necessary – the elite glove puppet media will tell you so!

Dishonest money was firstly necessary, to preserve the Victorian capitalist model of society and culture featuring grotesque social inequality, and secondly was the harbinger of imperial war. In moral intellectual or conceptual terms, nothing at all has changed for our elites since Victorian times. However, industrial and technological innovation have also, very unfortunately, democratized nuclear weapons as well as other weapons. Very unfortunate, in particular, for atavistic morons admiring Victorian capitalism. Countries like China and India can hit back very, very hard, today.

For our elites, while they are still there at the helm of the Ship of State, the situation is in fact really simple. You really do have the choice even if you do not want to admit it!  Not admitting there is an alternative is absolutely critical to the elite, we can surmise. Their Herd Schizophrenia probably helps explain this.

Hassan Sabah (1034-1124), also called the Wise Man of the Mountain, in today's Syria, edicted the doctrine of assassination. His argument was that the assassination of one Warlord poised to start an epic battle, will avoid the useless death of 10 000 men. Junking the Victorian-minded neo-capitalist elite in the gutter, where they belong, will do the same.”