“OK, folks. Here's what's awaiting you. The End Times. The Apocalypse. The Rapture. The Final Reckoning. Oh, I could pick any one of a thousand representations of the Last Days from centuries of Western art. This one is Luca Signorelli's "The Damned Cast Into Hell," in the Capella Nuova chapel of Orvieto Cathedral, painted around the year 1500 (click to enlarge). 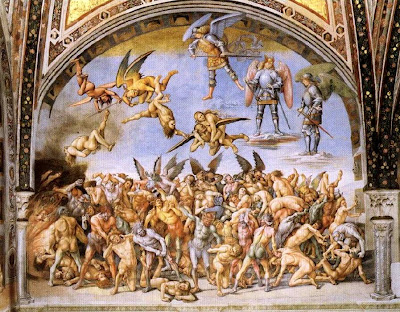 Why were these scenes of souls in extremis so common? Exhortations to be good? A reminder of what awaits us if we don't contribute to the Sunday collection? A local bishop trying to scare the bejesus out of his rebellious flock? Or were these scenes of tribulation just plain old popular with ordinary people, early versions of a Hollywood blockbuster armageddon movie? A pre-modern equivalent of the hugely popular "Left Behind" books of LaHaye and Jenkins?

We love Doomsday. I don't know why, but we seem to have a built-in fascination with the end of the world. Yeah, I watched the movie "Deep Impact." Loved it when that comet smashed into the ocean, sending a tidal wave over New York. The good guys survived. The sheep and the goats.

One Christian group or another has been anticipating the Apocalypse virtually every decade since the Guy himself went up into heaven. And it's not just religious folks. Today we have a secular doomsday genre. Cosmic catastrophe. Google "Nibiru." Eight million hits. A rogue planet that swings by Earth every 3600 years. The Sumerians named it. And the time is nigh. The winter solstice, 2012. The end of the Mayan calendar. This time it's gonna hit. Be afraid. Be very afraid.

Or not. But I wouldn't be surprised if a film called Nibiru is not in production. Meanwhile, we can enjoy the approach of the rogue planet even though it doesn't exist, just as the good folk of Signorelli's Orvieto presumably took a vicarious pleasure at seeing the winged demons drag their less virtuous neighbors down to hell. A suspension of disbelief. A bit of cognitive dissonance. That's entertainment.”
- http://blog.sciencemusings.com/
Posted by CoyotePrime at 7:41 PM