Chet Raymo, “The Universe Becomes Conscious of Itself”

“The Universe Becomes Conscious of Itself”
by Chet Raymo

"By now most of us will have seen this spectacular photograph of a dusty star-birthing region of the Carina Nebula, celebrating the 20th anniversary of the Hubble Space Telescope. I offer a slightly different cropping from what you may have seen in the media or on APOD. Please click the image to see it it all of its glory. 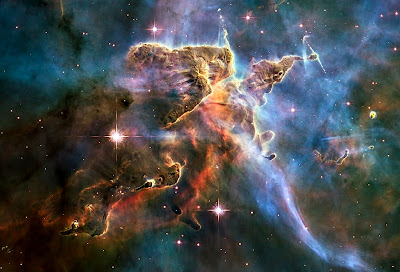 Let me add some context. The image shows an area of the sky that you could cover with the intersection of two crossed sewing pins held at arms length. Think about that for a minute. Hold two imaginary crossed pins up against the sky and think of the area covered by their intersection, what a tiny part of the visible universe you are looking at. The photo shows a nebulosity that is invisible to the naked eye, in the midst of the southern-hemisphere Milky Way. Where is this object? Our Sun is on the inside edge of an arm of our spiral galaxy, about two-thirds of the way - 30,000 light-years - out from the center. The Carina Nebula is in the same spiral arm, trailing along 7500 light-years behind us as we make our languorous 200-million-year rotation about the galactic axis. There are hundreds of billions of stars in the Milky Way Galaxy, including the ones you see aborning here. And the Milky Way Galaxy is just one of tens of billions of galaxies we could potentially see with present telescopes.

Now, in my usual mischievous way, let me juxtapose two images of the heavens (please click to fill your screen). On the left is Gustave Dore's rendering of Dante and Beatrice looking upon the heavenly realm, the choirs of angels attendant upon the Diety, the anthropomorphic Empyrean Fields where the souls of the Blessed find everlasting life, just up there beyond the spheres of air and aether. And on the right, the new image from the Hubble.

I'm confident that anyone who visits here, and probably most educated people, will agree that the image on the right, and my description above, is the truer representation of the universe we live in. But which universe do we psychologically inhabit? I would maintain that the great majority of educated people today have not yet assimilated the picture on the right, and continue to live as if they were contemporaries of Dante. I know I have a hard time grasping the scale of the universe as revealed by modern astronomy - and I have been studying and teaching this stuff for a lifetime. Coming to terms with the vast size and apparent indifference of the universe is not easy when the tug of culture continually pulls us back into the cozy human-centered cosmos of our ancestors.

Where is our contemporary Beatrice who will take us by the hand and lead us into the swirling star-birthing vortex of the Carina Nebula, and say to us, "See, all this is the gift of the human intellect - human ingenuity and human daring - all this is contained in those convolutions of mortal flesh that sit at the top of your spine"?
- http://blog.sciencemusings.com/
Posted by CoyotePrime at 5:17 PM