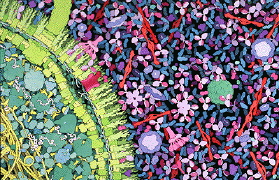 “Whence Ourselves?”
by Chet Raymo

“I recently thought of David S. Goodsell's "The Machinery of Life," and I found myself reading the book again. There is nothing I didn't already know, but it's worth reading again for the same reason one might read, say, Anna Karenina or Moby Dick several times in the course of a life. In fact, Goodsell's book would be a good candidate for the one science book I would recommend to someone stuck on a desert island.

Step by step he takes us through the molecular machinery shared by all life on Earth. Humans have a lot more in common with a bacterium, say, that we might be inclined to think. One of Goodsell's vivid illustrations shows three versions of the enzyme glyceraldehyde-3-phosphate dehydrogenase - vital for the metabolism of sugar - from E. coli bacteria, spinach, and human. At first glance they look identical. Close inspection shows minor differences. Our shared family tree. Carbon, oxygen, nitrogen, sulfur, phosphorous, hydrogen. Four nucleotides and twenty amino acids. Nucleic acids (DNA, RNA), proteins, lipids, polysaccharides. Rotors, pumps, motors, triggers, dams, channels, gates: Not just metaphors, but functional analogies. The Tinkertoy set that unites all life on Earth.

Many of us seem to believe that anything we can understand cannot be worth much, and therefore we resist the scientific understanding of self, and especially any understanding that evokes "machinery." But, as I wrote in "When God Is Gone," the ability to know is the measure of our human uniqueness, the one emergent quality that distinguishes us from other creatures. Understanding the machinery of life does not mean that we will ever encompass with our science the rich detail of an individual human life, or the infinitude of ways by which a human brain interacts with the world. Thousands of years ago Heraclitus said: "You could not discover the limits of soul, not even if you traveled down every road. Such is the depth of its form."

The mechanical metaphor for life does not so much reduce the marvelous to the mundane, as it elevates the mundane to the marvelous. "Mundane" comes from the Latin mundus, meaning "world." The more we understand the molecular machinery of life, the more truly marvelous the world becomes. Anyone who can read Goodsell's book - or even look at the illustrations - and not feel elevated is floating in a conceptual universe totally cut off from the place that gave us birth.”
- http://blog.sciencemusings.com/2010_04_01_archive.html
Posted by CoyotePrime at 8:16 PM