The Economy: “But There's No Inflation!” 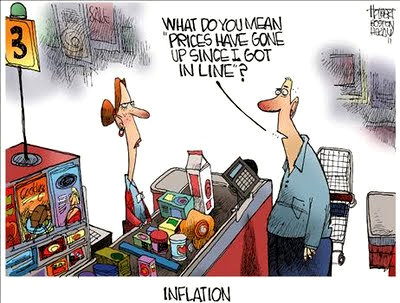 “But There's No Inflation!”
by Karl Denninger

“Trust me, they say, the CPI is essentially zero, so there's no inflation. Uh huh. As Labor Day approaches and the usual ritual of grill use approaches, is that true?  No, say people actually going to the store: "We've always done burgers in the past. They used to cost around $2 per person, but now it's up to $3.75," says Ms. Powers-Mattioli, a clothing-store and dog-spa owner who lives in Hamburg, N.Y. The couple spends a lot on drinks and music, and this year they want to keep the food budget under control, she says. "I thought hamburgers were just an everyday staple, but I'm not going to pay nearly double for them."

$2 to $3.75?  What's that inflation rate- 87% or so? But there's no inflation, so they say! Uh huh.  The cash register receipt says otherwise. Isolated incident? Uh, nope. Ms. Powers-Mattioli recently did a double-take when checking her weekly grocery-store receipts. Typically, she spends around $130 a week on groceries for her husband, young daughter and herself, but lately that figure has climbed to around $200. "I don't even buy chips, snacks or any pre-made salads anymore," she says. "What is going on?"

It's called a lie Ms. Powers-Mattioli. You know, what politicians and others in power do, and you, along with the rest of us (yes, myself included) let them get away with? Yes, that. That wee little problem. And we let them do it even when it reams us straight up the exit door.

Why do we allow it? Why do you allow it? Do you think voting will fix it? Has it fixed it over the last few decades? I can't recall a single case where voting has done a thing about this problem. Why would it this time around?

Remember one thing folks, as you swill the beer and grill whatever you can still afford: Government only exists with the consent of the governed. Ever.

So before you bitch get up and have a look in the mirror. You'll find the person who gives consent each and every day staring back at you.  Each and every one of us is responsible for this and it will continue until we demand that it stop or you're no longer able to grill- or heat your home- at all.

PS: The root cause is not The Fed, contrary to certain people's assertions.  It is in fact deficit spending in all its forms, and there are a lot of them, with the most-blatant and obvious coming straight from The US House and Senate.”
- http://market-ticker.org/
Posted by CoyotePrime at 3:42 PM