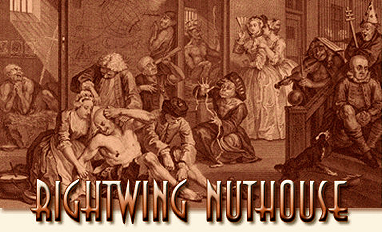 "1. Kirk Cameron: Obama Halloween masks are actually celebrating Jesus’ triumph over Satan. Former "Growing Pains" star Kirk Cameron is doing his darndest to rebrand Halloween as a Christian holiday. At the same time, the uber-right-wing Christian actor is getting his digs in at Obama. “When you go out on Halloween and see all people dressed in costumes and see someone in a great big bobble-head Obama costume with great big ears and an Obama face, are they honoring him or poking fun?” Cameron said to one of his favorite publications, The Christian Post. Of course, he knows the answer: "They are poking fun at him."

Crazy started when Cameron compared this to how early Christians dressed up in devil, goblin and witch costumes to make the point that these evils were vanquished by Jesus.  “The costumes poke fun at the fact that the devil and other evils were publicly humiliated by Christ at His resurrection.” Just as Obama has been vanquished by Jesus. Amirite?

Cameron is also anxious to assert Christian ownership of Halloween, despite the fact that most historians and anthropologists say its origins are pagan and go back to harvest festivals. In Cameron’s cheery rewriting, Halloween isn’t even about death. So, what Christians should do for Halloween is throw a party and show how “death was defeated,” by Jesus. We did not know that death had been defeated. Has this been widely reported?

For his next act, Cameron will save Christmas. From the Grinch, presumably.

2. Fox Newser Kimberly Guilfoyle: Young women should not vote or serve on juries. They should just go back on Tinder. Women—especially young women —tend not to vote Republican. Hmmm. Wonder why that is. Nothing to do with the all-out assault on abortion rights. No. Nothing to do with Republicans not supporting equal pay for equal work laws. Nothing to do with “binders of women,” or “legitimate rape” or television ads suggesting that voting is much like choosing a wedding dress.

Nope. Fox News’ “The Five” host Kimberly Guilfoyle thinks it’s because young women just don’t “get it.” “It’s the same reason why young women on juries are not a good idea,” Guilfoyle said. “They don’t get it. They’re not in that same life experience of paying the bills, doing the mortgage, kids, community, crime, education, healthcare. They’re like healthy and hot and running around without a care in the world. I just thank and excuse them so they can go back on Tinder or Match.com,” Guilfoyle offered, jocularly.

Even some of the male panelists appeared to be squirming, though they love a good cat-fight. Saves them the trouble of insulting women. Panelist Greg Gutfield soberly opined, “with age comes wisdom” and “the older you get, the more conservative you get.”

Still, strangely, the only young people who lack the wisdom to vote or serve on juries according to Guilfoyle are female. Guilfoyle later clarified that she just meant that young women can maybe vote but they should not serve on juries. "I said I want to 'thank and excuse' someone from jury service," Guilfoyle said. "That is the language you use in the courtroom. If they want to go back and do social media or dating websites, fine." She added, "I take the right to vote very seriously. I take the right to serve on a jury very seriously. And I think you should be informed when you do both things."

So there, not sexist at all. Why would you think that? She did not mention that to be informed, you mustn’t watch Fox News, which actually sucks information out of your brain.

3. Texas wing-nut congressman sees parallel between Ebola crisis and zombie movies. Speaking of brain sucking... Texas GOP Representative Blake Farenthold already has the birther credentials that qualify him, some say, to succeed Michele Bachmann as the nuttiest nutjob in Congress. (Esquire political blogger Charles Pierce’s name for the post is the "Royal Regent of the Crazy People", of which Louie Gohmert is Emperor for Life.) But this man, Farenthold is a serious contender. His contribution to the national dialogue on Ebola, and the CDC’s handling of it this week was this: “Every outbreak novel or zombie movie you see starts with somebody from the government sitting in front of panel like this saying there's nothing to worry about.”

So, he’s not having any trouble separating fact from fiction. None whatsoever.

4. Joni Ernst wants to go to Washington and be a senator packing heat, in case she’s attacked by the government. It’s one thing to run on a shrink-the-government platform. Wing-nut Joni Ernst of Iowa is running for Senate on a “I’m scared of the government; that’s why I need to carry my gun with me everywhere to protect me from the government that I want to join,” platform. OK, it’s a little long and unwieldy, but she’s working on it.

Video surfaced this week of this Koch-funded Iowa extremist speaking lovingly of her gun at an NRA event two years ago. Somehow, it seems relevant now. In it, Ernst says: “I have a beautiful little Smith & Wesson, 9 millimeter, and it goes with me virtually everywhere… I believe in the right to defend myself and my family — whether it’s from an intruder, or whether it’s from the government, should they decide that my rights are no longer important.”

This beacon of level-headed leadership won the GOP primary with the help of an ad showing her glee at castrating hogs. “Washington’s full of big spenders,” she said to the camera before slicing into the unfortunate animal’s balls, “let’s make ‘em squeal.” Kind of like the guy in Deliverance." Ernst has also gone on the record for promising to jail federal bureaucrats who try to implement Obamacare in her state. She is really a Koch kind of gal.

Now that we know that this loon’s got a gun and she knows how to use it—and she’s ahead in the polls—we can all sleep better at night.

5. Pat Robertson: The gay terrorist Inquisition is just so terribly wrong. Pastor Pat's increasingly enfeebled mind is working overtime to come up with enough scary rhetoric about gay people. So he combined two really bad things—terrorism and the Spanish Inquisition—and told his viewers that gay people are doing both. “These people are terrorists, they’re radicals and they’re extremists,” the hysterical evangelical told 700 Club viewers. “No Christian in his right mind would ever try to enforce somebody against their belief or else suffer jail. They did that during the Inquisition, it was horrible, it was a black mark on our history, but it isn’t being done now.”  Robertson thinks it’s time that pastors put up their dukes and fight these “homosexuals.” Because no one has thought of that, ha! Christians persecuting gays? Never.

No, the gentle Christians are just rolling over in the face of this scary gay terrorism. “If the gays want to go out and do their gay sex, that’s one thing,” said the very Reverend. “But if they want to force you to accept and solemnify it by marriage, that’s another matter.. . .”

Hear that, the gays? Uncle Pat says it’s all right for you to go out and do your gay sex."
- http://www.alternet.org/
Posted by CoyotePrime at 3:34 PM