"Distorted galaxy NGC 2442 can be found in the southern constellation of the flying fish, (Piscis) Volans. Located about 50 million light-years away, the galaxy's two spiral arms extending from a pronounced central bar give it a hook-shaped appearance. This deep color image also shows the arms' obscuring dust lanes, young blue star clusters and reddish star forming regions surrounding a core of yellowish light from an older population of stars. 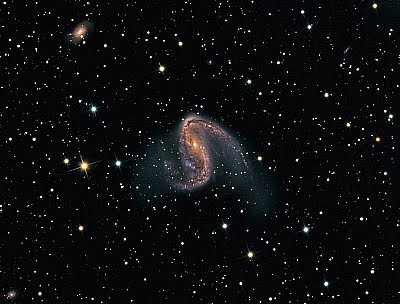 But the star forming regions seem more concentrated along the drawn-out (right side) spiral arm. The distorted structure is likely the result of an ancient close encounter with the smaller galaxy seen near the top left of this field of view. The two interacting galaxies are separated by about 150,000 light-years at the estimated distance of NGC 2442."
- http://www.antwrp.gsfc.nasa.gov/apod/ap090228.html
•
"Why Do We Look to the Stars?"

"The Cosmos is all that is or ever was or ever will be. Our feeblest contemplations of the Cosmos stir us — there is a tingling in the spine, a catch in the voice, a faint sensation of a distant memory, as if we were falling from a great height. We know we are approaching the greatest of mysteries.

For as long as there has been humans we have searched for our place in the cosmos. Where are we? Who are we? We find that we live on an insignificant planet of a hum-drum star lost in a galaxy tucked away in some forgotten corner of a universe in which there are far more galaxies than people. This perspective is a courageous continuation of our penchant for constructing and testing mental models of the skies; the Sun as a red-hot stone, the stars as a celestial flame, the Galaxy as the backbone of night.
․
The size and age of the Cosmos are beyond ordinary human understanding. Lost somewhere between immensity and eternity is our tiny planetary home. In a cosmic perspective, most human concerns seem insignificant, even petty. And yet our species is young and curious and brave and shows much promise. In the last few millennia we have made the most astonishing and unexpected discoveries about the Cosmos and our place within it, explorations that are exhilarating to consider. They remind us that humans have evolved to wonder, that understanding is a joy, that knowledge is prerequisite to survival. I believe our future depends powerfully on how well we understand this Cosmos in which we float like a mote of dust in the morning sky. Imagination will often carry us to worlds that never were. But without it we go nowhere."
- Carl Sagan
Posted by CoyotePrime at 9:52 PM