"To my mind, there is no more spiritually fulfilling experience than lying on one's back under a crystal clear late-summer sky unpolluted by artificial light and seeing the Milky Way arching across the dome of night from Sagittarius in the south to Cassiopeia in the north. Those of you who live in the southern hemisphere will have a different perspective, including a loftier view of the brilliant luminosity near the galactic center in Sagittarius, but you know what I mean. One has a sense of falling into infinity, of becoming a born-again child of cosmic space and time.

Knowledge lifts the experience above the purely sensual or aesthetic. Knowing what one is looking at- a galaxy of hundreds of billons of stars, most too distant to be visible to the unaided eye other than by their accumulated light- lifts us up and out of the limitations of our senses and gives soaring flight to our imagination. In "The Soul of the Night" I trace the long persistent in myth of the monster in the whirlpool, from Homer's Charybdis to the Nordic Great Kraken to Herman Melville's whale-induced whirlpool that drags the Pequod and all her sailors but one to a watery oblivion.

The Milky Way is a whirlpool, a colossal spiral one-hundred-thousand light-years wide, turning on its axis once every few hundred million years, imperceptibly slowly on the human time scale, but in a time-lapse movie of the universe's history it spins like a toy pinwheel in a stiff wind. The last time we were more or less where we are today, dinosaurs roamed the Earth.

And at its core- a monster: 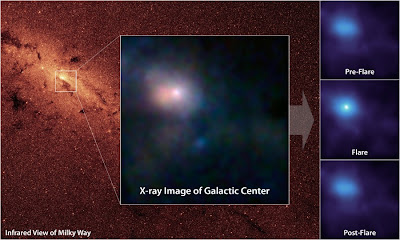 Here is an X-ray image (a recent APOD) of the galactic center, undergoing a sudden flare-up in brightness. Astronomers have confirmed the existence at the center of this region of a black hole with a mass of millions of Suns. There it sits, calmly feeding on surrounding stars and gas, occasionally gulping down a flare-inducing, cheek-stuffing mouthful. It is not the black hole itself we are seeing in these images, but the energy emitted as stars and gas make their fatal fall. The black hole itself is a region of space smaller that the size of the Earth's orbit for which the gravitational pull of the hole's mass is too great for even light to escape. The mass inside- those millions of gobbled stars- is squeezed down, down, down to the size of the Earth, to the size of a baseball, to the size of a pinhead, to…

Born again, into a universe of almost incomprehensible dimension, awash in wonder and mystery. Children of the Milky Way.”
- http://blog.sciencemusings.com/
Posted by CoyotePrime at 5:48 PM