“Guess How Much America's War Against Isis Costs Every Single Day?” 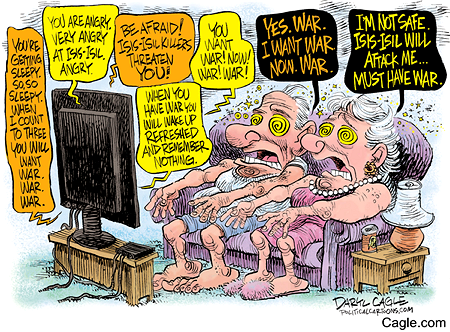 “Guess How Much America's War Against Isis Costs Every Single Day?”
by AFP

“The Pentagon has revised its estimate of the cost of the US air war in Iraq and Syria, saying the price tag for the campaign against the Islamic State group comes to about $8.3 million a day. Since air strikes began on August 8, the campaign — which has involved about 6,600 sorties by US and allied aircraft — has cost $580 million, said Pentagon spokesman Commander Bill Urban.

The Defense Department had previously put the average daily cost of the military operation at more than $7 million a day. The higher figure reflected the increased pace of air strikes and related flights, a defense official, who spoke on condition of anonymity, told AFP. But independent analysts say the Defense Department is underestimating the genuine cost of the war effort, which began in mid-June with the deployment of hundreds of US troops to secure the American embassy in Baghdad and to advise the Iraqi army.

Some former budget officials and outside experts estimate the cost of the war has already exceeded a billion dollars, and that it could rise to several billion dollars in a year’s time. Todd Harrison of the Center for Strategic and Budgetary Assessments projected the war could cost $2.4 to $3.8 billion a year, in an analysis issued on September 29. If the intensity of the bombing raids is expanded, the air war could cost as much as $4.2 to $6.8 billion per year, according to Harrison’s report.

One of the biggest drains on the budget for the air war are the large number of surveillance and reconnaissance flights that bombing raids require, analysts say. The campaign, dubbed “Operation Inherent Resolve,” has seen thousands of spy flights and aerial refueling runs. The cost of flying the spy planes range from about $1,000 an hour for Predator and Reaper drones to $7,000 an hour for high-altitude Global Hawk drones, or as much as $22,000 per hour for E-8 J-STAR (Joint Surveillance Target Radar Attack System) aircraft.

Funds for the air war are coming out of the Pentagon’s de facto war budget, the Overseas Contingency Operations fund. Separate from the regular defense “base” budget, the OCO fund is often portrayed as a “credit card” to cover the costs of wars. Congress increased the OCO budget to about $85 billion for last fiscal year, ending September 30. The proposed fund for the new fiscal year 2015 is due to drop to $54 billion.”
- http://www.alternet.org/
◆
Meanwhile...
"There Are 80,000 Homeless Kids in New York City"
- http://www.alternet.org/there-are-80000-homeless-kids-new-york-city