Satire: “Study: Fear of Ebola Highest Among People Who Did Not Pay Attention During Math and Science Classes” 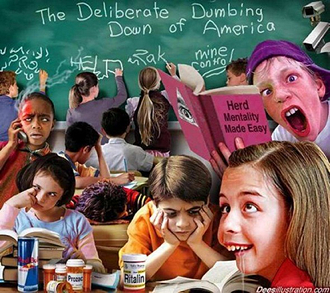 “Study: Fear of Ebola Highest Among People Who Did
Not Pay Attention During Math and Science Classes”
by Andy Borowitz

MINNEAPOLIS (The Borowitz Report)— “A new study, by the University of Minnesota, indicates that fear of contracting the Ebola virus is highest among Americans who did not pay attention during math and science classes. According to the study, those whose minds were elsewhere while being taught certain concepts, like what a virus is and numbers, are at a significantly greater risk of being afraid of catching Ebola than people who were paying even scant attention.

Interviews conducted with people who spent math and science classes focussing on what they would be having for dinner or what the student in front of them was wearing revealed the difficulty they are currently having grasping basic facts about Ebola. For example, when a participant of the study was told that he had a one-in-thirteen-million chance of contracting the virus, his response was, “Whoa. Thirteen million is a really big number. That is totally scary.”

Davis Logsdon, who conducted the study for the University of Minnesota, puts the number of Americans who did not pay attention during math and science classes at seventy-two per cent, but adds, “I seriously doubt most people will know what that means.”
- http://www.newyorker.com/
Posted by CoyotePrime at 2:19 PM