History: “The Charge of the Light Brigade"

“The Charge of the Light Brigade"
Compiled By CP
.
“All the talk of history is of nothing almost but fighting and killing, and the honor and renown which are bestowed on conquerors, who, for the most part, are mere butchers of mankind, mislead growing youth, who, by these means, come to think slaughter the most laudable business of mankind, and the most heroic of virtue.” - John Locke 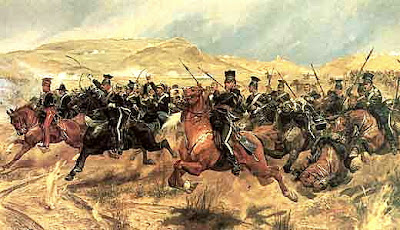 “The Charge of the Light Brigade was a charge of British cavalry led by Lord Cardigan against Russian forces during the Battle of Balaclava on 25 October 1854 in the Crimean War. The charge was the result of a miscommunication in such a way that the brigade attempted a much more difficult objective than intended by the overall commander Lord Raglan. Blame for the miscommunication has remained controversial, as the original order itself was vague. The charge produced no decisive gains and resulted in very high casualties, and is best remembered as the subject of the poem "The Charge of the Light Brigade" by Alfred, Lord Tennyson, whose lines emphasize the valor of the cavalry in carrying out their orders, even "tho' the soldier knew/Some one had blunder'd".

The charge was made by the Light Brigade of the British cavalry, consisting of the 4th and 13th Light Dragoons, 17th Lancers, and the 8th and 11th Hussars, under the command of Major General the Earl of Cardigan. Together with the Heavy Brigade comprising the 4th Royal Irish Dragoon Guards, the 5th Dragoon Guards, the 6th Inniskilling Dragoons and the Scots Greys, commanded by Major General James Yorke Scarlett, himself a past Commanding Officer of the 5th Dragoon Guards, the two units were the main British cavalry force at the battle. Overall command of the cavalry resided with Lieutenant General the Earl of Lucan. Cardigan and Lucan were brothers-in-law who disliked each other intensely.

Lucan received an order from the army commander Lord Raglan stating that "Lord Raglan wishes the Cavalry to advance rapidly to the front, follow the enemy, and try to prevent the enemy carrying away the guns. Troop Horse Artillery may accompany. French Cavalry is on your left. Immediate." Raglan in fact wished the cavalry to prevent the Russians taking away the naval guns from the redoubts that they had captured on the reverse side of the Causeway Heights, the hill forming the south side of the valley. Raglan could see what was happening from his high vantage-point on the west of the valley, but Lucan and the cavalry were unaware of what was going on owing to the lie of the land where they were drawn up. The order was drafted by Brigadier Richard Airey and was carried by Captain Louis Edward Nolan, who carried the further oral instruction that the cavalry was to attack immediately. When Lucan asked what guns were referred to, Nolan is said to have indicated, by a wide sweep of his arm, not the Causeway redoubts but the mass of Russian guns in a redoubt at the end of the valley, around a mile away. His reasons for the misdirection are unclear, as he was killed in the ensuing battle.

In response to the order, Lucan instructed Cardigan to lead 673 (some sources state 661; another 607 cavalrymen straight into the valley between the Fedyukhin Heights and the Causeway Heights, famously dubbed the "Valley of Death" by the poet Tennyson. The opposing Russian forces were commanded by Pavel Liprandi and included approximately 20 battalions of infantry supported by over fifty artillery pieces. These forces were deployed on both sides and at the opposite end of the valley. Lucan himself was to follow with the Heavy Brigade.

The Light Brigade set off down the valley with Cardigan out in front leading the charge. Almost at once Nolan was seen to rush across the front, passing in front of Cardigan. It may be that he then realized the charge was aimed at the wrong target and was attempting to stop or turn the brigade, but he was killed by an artillery shell and the cavalry continued on its course. Despite withering fire from three sides that devastated their force on the ride, the Light Brigade was able to engage the Russian forces at the end of the valley and force them back from the redoubt, but it suffered heavy casualties and was soon forced to retire. The surviving Russian artillerymen returned to their guns and opened fire once again, with grape and canister, indiscriminately at the mêlée of friend and foe before them. Lucan failed to provide any support for Cardigan, and it was speculated that he was motivated by an enmity for his brother-in-law that had lasted some 30 years and had been intensified during the campaign up to that point. The troops of the Heavy Brigade entered the mouth of the valley but did not advance further. Lucan's subsequent explanation was that he saw no point in having a second brigade mown down and that he was best positioned where he was to render assistance to Light Brigade survivors returning from the charge. The French light cavalry, the Chasseurs d'Afrique, was more effective in that it cleared the Fedyukhin Heights of the two half batteries of guns, two infantry battalions and Cossacks to ensure the Light Brigade would not be hit by fire from that flank and later provided cover for the remaining elements of the Light Brigade as they withdrew. War correspondent William Russell, who witnessed the battle, declared "our Light Brigade was annihilated by their own rashness, and by the brutality of a ferocious enemy.”

‘Forward, the Light Brigade!’
Was there a man dismay'd?
Not tho' the soldier knew
Someone had blunder'd:
Their's not to make reply,
Their's not to reason why,
Their's but to do and die:
Into the valley of Death
Rode the six hundred.

Flash'd all their sabres bare,
Flash'd as they turn'd in air,
Sabring the gunners there,
Charging an army, while
All the world wonder'd:
Plunged in the battery-smoke
Right thro' the line they broke;
Cossack and Russian
Reel'd from the sabre stroke
Shatter'd and sunder'd.
Then they rode back, but not
Not the six hundred.