The Economy: "The Biggest Financial Heist in History" 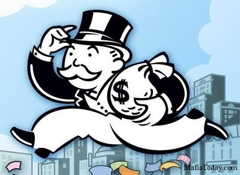 "The Biggest Financial Heist in History"
by Bill Bonner

"If Mr. Market is afraid, he is putting on a brave face. The Fed's QE ended on Wednesday. On Thursday, the Dow rose 221 points.  This is good news for Janet Yellen. She must think she has made a clean getaway. She has fled the scene of the biggest financial heist in history with no cops in sight. They're not even aware a crime has been committed! This grand larceny involved $3.6 trillion. Counterfeit – every dollar of it. Not a penny of it was ever honestly earned or earnestly saved... or dug out of the dirt and turned into coins.

No... We're talking about the crime of the century... committed in broad daylight... with millions of witnesses. But hardly a single soul understood what was going on.

We begin by asking: How many TVs, luxury apartments, spaghetti dinners and parking places are there?

Answer: We have no idea. But it's not an infinite number. And every one of them has a price. Who gets them? The people with the money.

Next question: Who has the money? We don't know that either. But the Fed fabricated $3.6 trillion over the last five years... and every penny ended up in someone's hands. Follow the money. You will find out what happened.

Stockman was present at the creation, so to speak. He was President Reagan's budget director when the Republican Party ran off the rails and veered sharply toward deficits and activism.  Stockman fought hard to stop it, battling Dick Cheney and the neocons, and he lost. He wrote a book about the wreck, "The Triumph of Politics."

The title tells the tale. Politics won out over sound fiscal principles. "Deficits don't matter," said Cheney. Which means debt doesn't matter. And if debt doesn't matter, what kind of world do we live in? But thenceforth, neither Republican nor Democratic administrations stood in the way of the great credit bubble.

Stockman was soon out of a job on Capitol Hill. He went to Wall Street, where he witnessed, firsthand, the other side of the Great Deformation.  With an almost infinite amount of credit to work with, Wall Street quickly rose to the challenge. It peddled debt to everyone – governments, corporations and households.

Americans took the bait. From President Reagan's first inauguration until 2014, they spent, on average, about $1 trillion more a year than they earned. Their lifestyles – and Wall Street's earnings – came to depend on it. From about 10% of total corporate earnings in the 1960s and 1970s, Wall Street's share rose to 40% by 2007. And bonuses rose into the millions... as hedge fund managers and bankers pushed the old industrial tycoons out of their stately Greenwich, Connecticut, homes.

Stockman knows the story intimately. He lived it. He tells it in detail in his book. About which more anon...

Numskulls and Knaves: Let's turn to Kaul... We met him in India. He is a writer with a deep knowledge of and keen interest in political economy. In his book, he generously credits our visit with having "opened up a whole new world" to him. This is a reflection more on the world he lived in than on our ability to open it up. Kaul – a literate, intelligent commentator for India's largest economic journals – was unaware that there was another way to understand what was going on.

We take it for granted that the financial authorities – in practically every major economy save Deutschland – are either numskulls or knaves... and probably both.  We have been observing their handiwork... poking at it... turning it over with a stick... and beating on it for 15 years. We forget that most people really have no idea how it works. And why should they? Central bank monetary policy is as mysterious as the virgin birth or the exact chemical formula for Spam, as far as they are concerned.

Kaul takes a longer and broader view of how it all came about. The feds – led by those in the US – have created an immense bubble, with total worldwide debt now over $100 trillion.

This was not done overnight. It was more than 30 years ago when the US federal government began running deficits year after year. It was almost 50 years ago that the dollar's golden anchor was given the heave-ho, leaving the world to float on a sea of paper money. And it was 65 years since the top of the last bond bull market. These trends – so long, so deep and so pervasive – have convinced most people that our financial world is "normal." Won't they be surprised when they find out how strange and transitory it really is!

"Various experts have come up with various reasons behind the financial crisis," writes Kaul. "Some feel the crisis was because Wall Street was greedy. But then the question to ask is: When was Wall Street not greedy? And given this, why didn't financial crises happen all the time?" They didn't happen all the time because never before in the history of man have the entire world's finances been so distorted by debt.

Debt is what Wall Street sold. Debt is what Washington wanted. And debt is how the elite transferred wealth from the public to themselves. Janet Yellen et al transferred $3.6 trillion from the public (where else could it come from?) to a very special elite: holders of financial assets. They are richer. The public is poorer. And it looks as though she has gotten away with it. But the crisis of 2008-09 was not the end of the debt bubble story. It was the beginning."
- http://www.thedailyreckoning.com
Posted by CoyotePrime at 11:11 AM