“Why Would You Support This Government?” 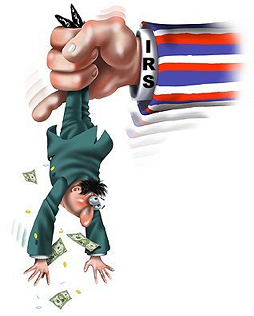 “Why Would You Support This Government?”
by Karl Denninger

“Ready to withdraw your consent yet? There are times when it becomes absolutely impossible to support the remarkably bad judgment often displayed by federal agencies under the control of the current administration- even for those of us who are typically viewed as backers of many of this administration’s policies. The latest installment of frightfully unacceptable government behavior involves a law created in 2000- the “Civil Asset Forfeiture Reform Act of 2000”- granting the IRS the power to seize the bank accounts of those suspected to be terrorists, drug dealers or engaged in other criminal activity, even when no charges have been filed and no convictions achieved.

What's the problem? The IRS seizing money from people who are never charged with a crime, say much less convicted. It's been going on for a long time but suddenly, just now, people notice it and articles show up. I've written on it several times over the years. Look, I'm all for going after money laundering (although we ought to start with the banks that have been caught moving billions for drug gangs yet are simply fined rather than having people go to prison) and other forms of criminal activity.

But this sort of thing is not law enforcement nor prosecution of bad guys. It's pure theft and extortion. It doesn't matter who does it, a thing is what it is. If the government acts in a form and fashion that is felonious, no matter what they call it or how they couch it, why is it that you consent to said government again? Think long and hard on that, folks.”
- http://market-ticker.org/
Posted by CoyotePrime at 1:07 PM