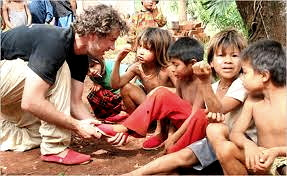 “The New York Sunday Times Magazine had an article about Professor Robert George of Princeton University, a Roman Catholic who has become a leading intellectual light of Catholic bishops and conservatives generally. George has been particularly effective in providing philosophical ammunition against abortion rights, embryonic stem-cell research, and same-sex marriage. It is not my intention to discuss these issues here; there are other more appropriate forums. I would, however, like to comment on the concept of so-called "natural law" that George evokes in support of his philosophical positions - the idea that there are moral laws built into the fabric of nature that can be known by reason alone.

I first encountered natural law in 1958 as a young married graduate student at U.C.L.A. when I went with my new spouse to Newman House (the Catholic student center) for a symposium on contraception. The gist: Since it was the natural law that coitus should lead to conception, any artificial impediment was intrinsically evil. This stricture was not a matter of revelation, but was available to any right reasoning person. My spouse and I were skeptical. After all, it is part of the necessary logic of life that individuals must die; why then is it not immoral to use antibiotics, say, to prolong the pleasure of living.

I am no ethicist or moral philosopher, but nothing I have learned in 77 years suggests that "oughts" are built into nature. Altruism within groups would appear to be part of our biological heritage. A tendency toward violence against those outside the group likely has a genetic component. Surely we are programmed for sexual pleasure, precisely to encourage reproduction. And so on. All of this might reasonably have evolved by natural selection, but "ought" - how exactly might that be imprinted onto nature?

Natural law? We speak of the laws of nature and study them in science. But the laws we have discerned appear to be amoral. An apple falling to the ground is not constrained by ethics.

Which is not to suggest that humans are amoral animals. We are creatures of culture as well as biology. We can aspire to expand group altruism and restrain violence because we have learned that to do so enhances the greater happiness of all. We can endorse the use of contraceptives because it can help alievate abject proverty and disease, or simply to allow individuals sexual pleasure without the unwanted responsibilities of parenthood. We can choose to live by the Golden Rule because we know that our own happiness depends upon the happiness of others.

I like to think that our finest quality as humans is our ability to recognize our genetic inheritance, parse it within a civilized context, and devise personal and collective moral principles by which to live. Indeed, this is what the great religious and secular moral philosophers have been urging all along. The motive is not revelation, or natural law, but a consideration of the common good. And because, for most of us at least, it feels good to do good.”
- http://blog.sciencemusings.com/2009_12_01_archive.html
Posted by CoyotePrime at 1:08 AM