"Thanksgiving: A Time To Imagine" 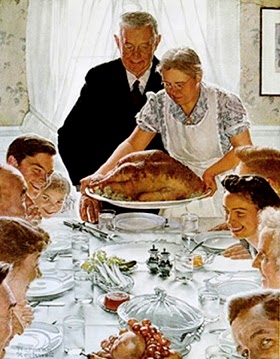 "Thanksgiving: A Time To Imagine"
By Frank Joseph Smecker

"Imagine if aliens from a galaxy light-years from Earth, decide to seek out a New World. Imagine they discover Earth, it’s the New World, they assume. And they pursue a relentless campaign of occupation, colonizing the planet. One by one, these aliens systematically remove, with much violent force, the people of the planet, starting with the First World dominant culture, because, of course, they’ll want what that culture has: access to the land and resources which that culture controls. Imagine these aliens succeed with such a crusade, centuries later marking the genocide with an annual feast celebrating a deluded history that claims they were embraced with much alacrity and congeniality, that, while they were killing off human beings to clear the way for their own culture, human beings weren’t fighting back but teaching them how to make mashed potatoes and gravy and pies and roast turkey and things. “C’mon, Frank…” you’re probably saying, “this is a bit too much, don’t you think?”

I know, I know, so this scenario is a bit kooky. Such a concept is a little too bonkers for the sociological imagination. Okay. Fine. Let’s try it another way.

Imagine if white settlers from a continent 3,325 miles from the eastern shorelines of an already inhabited continent, decided to seek out a New World putatively, circa 1620 AD. Imagine they discover “America,” it’s the New World, they assume. And they pursue a relentless campaign of occupation, colonizing the continent. One by one, these settlers systematically remove, with much violent force, the people of the North American continent, starting with the indigenous nations of the east, because, of course, they’ll want what those cultures have: access to the land and "resources" which those cultures inhabit and employ sustainably. Imagine these settlers succeeded with such a crusade, centuries later marking the genocide with an annual feast celebrating a deluded history that claims they were embraced with much alacrity and congeniality, that, while they were killing off the native indigenous to clear the way for their own culture, natives weren’t fighting back but teaching them how to make mashed potatoes and gravy and pies and roast turkey and things.

There. Not so crazy now, is it?

“About three-quarters of all adult Indians suffer alcoholism and/or other forms of substance abuse. This is not a ‘genetic condition.’ It is a desperate, collective attempt to escape our horrible reality since ‘America's Triumph.’ It's no mystery why Indians don't observe Thanksgiving. The real question is why do you feast rather than fast on what should be a national day of mourning and atonement. Before digging into your turkey and dressing on Nov. 23, you might wish to glance in a mirror and see if you can come up with an answer.” - Ward Churchill

“One indication of moral progress in the United States would be the replacement of Thanksgiving Day and its self-indulgent family feasting with a National Day of Atonement accompanied by a self-reflective collective fasting.” - Robert Jensen

"We suffer from a poverty level of 69 percent, which must be unimaginable to many people in this country, who would equate a situation such as this to one found only in Third World countries."
- Tribal Chairwoman Kathleen W. Kitcheya speaking about the San Carlos Apache Reservation.

“Those that escaped the fire were slain with the sword, some hewed to pieces, others run through with their rapiers, so as they were quickly dispatched and very few escaped. It was conceived that they thus destroyed about 400 at this time. It was a fearful sight to see them thus frying in the fire and the streams of blood quenching the same, and horrible was the stink and scent thereof; but the victory seemed a sweet sacrifice, and they gave the praise thereof to God, who had wrought so wonderfully for them, thus to enclose their enemies in their hands and give them so speedy a victory over so proud and insulting an enemy.”- William Bradford, a settler, describing Captain John Mason's attack on a Pequot village.

This Thanksgiving, rather than thoughtlessly stuffing yourself with food and then sauntering over to the couch for some postprandial football, think about how you can play your part in stopping the dominant culture from removing more indigenous cultures from their landbases to extract raw materials for industry that is destroying the planet’s ecological and climatic infrastructure."