"The Mysterious Phenomenon of 'Shadow People'" 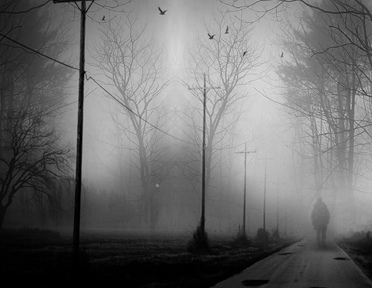 "The Mysterious Phenomenon of 'Shadow People'"
by Bernard Powell

"One of the most interesting and intriguing phenomena in the world of paranormal activity is that of the "Shadow People." Each and every week there seems to be more and more stories and reports involving these mysterious beings, and they certainly have become a hot topic and a subject of growing interest of research by investigators. Stories about these strange entities and their natures vary from harmless, quiet and shy observers to malevolent and downright nasty creatures of mal-intent. As with most things in the paranormal field, no one can say with any degree of certainty what these shadow beings are, but we will explore a few of the prevalent theories.

Shadow people have gained their nickname because they are most commonly observed or reported as having a human-like form. Unlike the typical descriptions of ghosts who are usually described as having human form with discernible characteristics such as physical features, clothing and accessories, shadow people are said to be feature-less. Generally, they are described as appearing to have mass, though their natures seem to vary from simple two-dimensional shadows, to distorted three-dimensional forms. Their movements are sometimes described as "unnatural" seeming to be very quick and disjointed. Sometimes they are said to move in slow motion, as if they were submerged in liquid, and then to suddenly move rapidly from one place to another within the room.

Again, some accounts differ even more widely and describe a completely black being with red eyes, a cloak, and a hat. This variation has become known as "the hat man". Many witnesses describe feeling a strong presence or a sense of being watched, many times they will get a glimpse of 'something dark' out of the corner of their eye, they turn to look in the direction of the presence only to see it disappear into thin air, or flee right through a wall. Sometimes they are reported as being childlike and playing games with witnesses. These seem to be curious and are also almost always seen through peripheral vision, when the witness turns to see them, rather than disappear through a wall or into thin air; they usually flee in a particular direction. Once while visiting my house, my sister reported chasing a small child around from room to room. Many times people interpret the presence of shadow people as being ominous and equate experiences with shadow beings with feelings of dread, ill intent and pure evil. Sometimes these shadow beings seem to be curious about the people who are seeing them.

Theories surrounding the nature and origin of shadow people abound. Some believe that they are inter-dimensional beings which exist in a universe parallel to our own. Others suggest that they are demonic entities, or are observers from another place, some even suggest that they may be thought forms unconsciously created by negative psychic energy and related to a place or event in which extreme emotional or physical stress/trauma has taken place.

It is extremely hard not to notice the subconscious symbolism implied by these manifestations. In Jungian Psychology and Philosophy the shadow is associated with the hidden aspects of the conscious mind; it is an archetype of the secret, repressed area of human nature and behavior, perhaps that is why feelings of fear and malevolence often accompany interaction with these beings. Possible Scientific Explanations:

Hypnogogia: Some of the conditions reported in shadow people experiences are similar to occurrences in episodes of sleep paralysis. Often times witnesses to shadow people have reported that the experiences occur just before falling asleep, or just after waking. Many times victims are in bed and report being 'held down' during visitations. Physiologically, this could be the result of a condition called hypnagogic paralysis. The body naturally goes through a state of paralysis during REM sleep in order to keep us from acting out our dreams physically. A temporary and unsettling paralysis can occur when we are suddenly awakened from an REM state into an awake state, but the bodily paralysis is still occurring. This causes the person to be fully aware, but unable to move. In addition, in this state the person is able to consciously perceive images from their subconscious mind. These hallucinations can be very real and can include some, or all sensory perceptions; the individual can experience taste, smell, auditory, tactile, and/or visual phenomena. Hypnogogia is sometimes known as 'the faces in the dark phenomenon' because sufferers commonly report seeing faces while experiencing waking-sleep. Similar hypotheses have been put forward linking this condition to a number of other apparent paranormal experiences, including alien abductions.

Pareidolia: In most instances, witnesses report seeing shadow people through their peripheral vision. This area of vision is linked to the area of the brain that is hard-wired to find familiar patterns, while providing less detail to the brain than center-forward vision does. This can lead to a condition known as pareidolia, in which the brain incorrectly interprets random patterns of light/shadow or texture as being familiar patterns such as faces and human/animal forms such as seeing familiar forms in clouds. This pheonomenon is known as 'matrixing' by many paranormal investigators.

Electromagnetic Fields: Recently, it has been found that electro-magnetic fields can interfere with the functions of the temporal lobe; creating altered states of perception in which auditory and visual hallucinations can occur. In recent studies researches have been able to recreate many of the experiences reported during paranormal encounters or hauntings under controlled conditions. Researchers have also documented correlations between naturally-occurring magnetic fields and areas where paranormal events have been reported.

As I said in the opening of this article, there is no way to definitively explain any reported occurrences in the paranormal field- yet. However, if we are ever to get to the root of these matters, and be able to one day discover what the nature of these experiences are, it is important for us to keep records of personal experiences and for those who are experiencing these things to come forward, so that we can have these stories to contrast against findings in the field. As for the shadow people, maybe they are a figment of our imaginations, maybe they are something more... maybe they are the Gatekeepers, at The Crossroads."
- http://www.sott.net/
Additional information: http://paranormal.about.com/
Posted by CoyotePrime at 9:42 PM