“The Origins of Human Language” 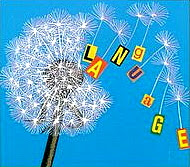 “The Origins of Human Language”
by the Huffington Post

“Human language arose in southern Africa, a study in "Science" magazine claims. Language then spread across the globe through human migration. The claim complements fossil findings that point to southern Africa as the birthplace of modern humans.

According to the Washington Post, researcher Quentin Atkinson of the University of Auckland in New Zealand conducted the study by breaking down 504 languages into their smallest components, called phonemes. As the Post explains, the words "rip" and "lip" are separated by one phoneme, "one corresponding to the letter 'r' and the other to the letter 'l.'" Atkinson then looked at the diversity of phonemes throughout the world and found that the farther a people would have travelled from Africa, the fewer phonemes in their language. This means that, as predicted by the study, languages in South America and the Pacific Islands had the fewest phonemes, while African languages had the most.

As groups left Africa, the number of phonemes in their language decrease. As the process was repeated, the total number of phonemes in all the languages created decreased, according to USA Today. This is the same pattern that applies to human genetics. Reports the Post: “The pattern matches that for human genetic diversity: As a general rule, the farther one gets from Africa - widely accepted as the ancestral home of our species - the smaller the differences between individuals within a particular population.”

The study is unique because it attempts to look at language in the distant past. According to the New York Times, language is at least 50,000 years old, which corresponds with the diaspora of modern humans from Africa. However, because words evolve so quickly, linguists are skeptical of claims of language traces over 10,000 years old. Atkinson used "sophisticated statistical methods developed for constructing genetic trees based on DNA sequences" in order to draw his conclusions, according to the Times. While viewed with suspicion by some, these new methods are leading to new insights into human language. Linguist Brian D. Joseph of the University of Ohio told the Times, "I think we ought to take this seriously, although there are some who will dismiss it out of hand."
- http://www.huffingtonpost.com/
Posted by CoyotePrime at 4:16 PM