"A Look to the Heavens, With Chet Raymo" 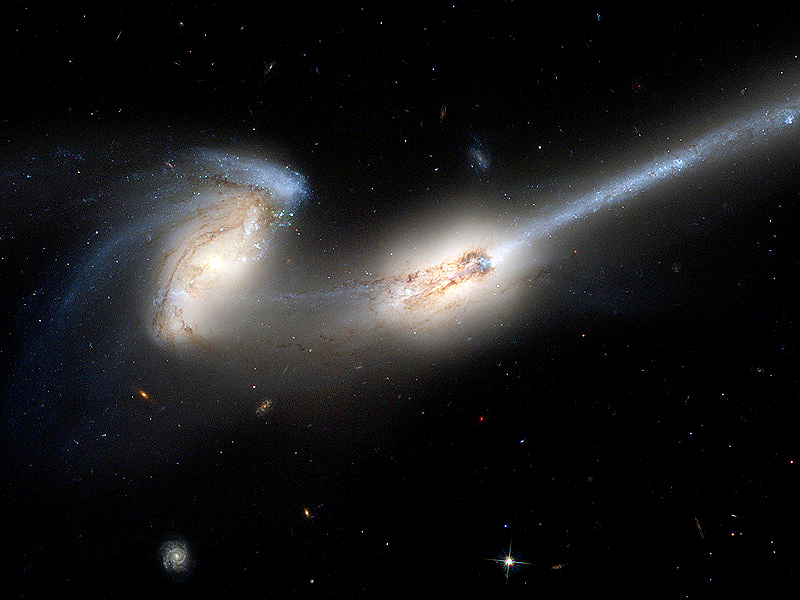 Click image for larger size.
"These two mighty galaxies are pulling each other apart. Known as " The Mice" because they have such long tails, each spiral galaxy has likely already passed through the other. They will probably collide again and again until they coalesce. The long tails are created by the relative difference between gravitational pulls on the near and far parts of each galaxy."
- http://apod.nasa.gov/apod/ap080224.html
*
"The Heaven's Embroidered Cloths"
by Chet Raymo
"In his "Defense of Poetry," Percy Bysshe Shelley said that one of the sacred tasks of the artist is to "absorb the new knowledge of the sciences and assimilate it to human needs, color it with human passions, transform it into the blood and bone of human nature." It is a lofty aspiration, but seldom works in practice. Contemporary science is increasingly complex and abstract, and the artist by temperament and training is seldom in a position to act as an interpreter. Scientists, on the other hand are not nearly as prepared as the artist to color their discoveries with human passions. The sad result is that the thrilling universe revealed by science remains largely aloof from "the blood and bone of human nature." Nearly half of Americans believe the universe is less than 10,000 years old, which suggests a staggering ignorance of biology, astronomy, and geology. The disconnect between science and the human passions is almost complete.
I wonder how many people who look at the astonishing new photographs from the Hubble Space Telescope (for example) grasp what it is they are looking at - the scope of cosmic space and time, the churning forges of the elements. Shelley saw the shape of night in his mind's eye - that long, conical shadow - and turned it into one of the most beautiful astronomical images in all of poetry. In "Prometheus Unbound," the Earth speaks these lines:
"I spin beneath my pyramid of night,
Which points into the heavens, dreaming delight,
Murmuring victorious joy in my enchanted sleep;
As a youth lulled by love-dreams faintly sighing,
Under the shadow of his beauty lying,
Which round his rest a watch of light and warmth doth keep."
- http://www.sciencemusings.com/
Posted by CoyotePrime at 4:05 PM