"Am I Wrong to Doubt the Government's Economic Figures?" 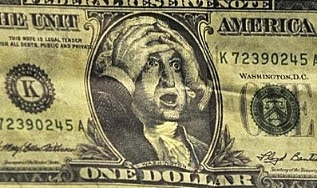 "Am I Wrong to Doubt the Government's Economic Figures?"
by Bill Bonner

"Has anyone seen my charger?" was probably the most common question heard in the Bonner household this Christmas. Everyone has an electronic communication device of some sort. Every device has a charger. And at any given moment its owner can't find it. iPhones and chargers all look alike. If you are in a house full of young people, and you are slightly retarded, the one in your pocket probably belongs to someone else.

That leaves the poor owner disconnected from what he believes is the real world – the world of Facebook, Twitter, Spotify and Instagram. Cut off, he soon goes into a kind of catatonic withdrawal – like a dead Christian mistakenly assigned to the Devil – and cries out in indignation, desperation and pain: "Who took my phone?" Thus prompted, your editor pulls the phone out of his pocket and tries his passcode on it. It doesn't work. So, he replies: "I can't find my phone either."

The Age of Miracles: Christmas has changed since the days of Scrooge and Cratchit. Even at the dinner table, you are likely to find someone checking the latest sports score or stock price. As to the stock price, he needn't bother. There was nothing much going on in the markets. Traders, investors and speculators are enjoying a midwinter holiday. They're also enjoying a spate of good news. As Chris reported yesterday, the latest revision to the third-quarter GDP growth number reveals the US economy growing at a 5% annual rate, with much of the boost coming from consumer spending.

Could that be correct? Sure. This is the Age of Miracles. People are ready to believe anything. Besides, it must be true. The Commerce Department calculated it. And the New York Times reports: "The American economy grew last quarter at its fastest rate in over a decade, providing the strongest evidence to date that the recovery is finally gaining sustained power more than five years after it began. Bolstered by robust spending among consumers and businesses alike, economic output rose at an annual rate of 5% during the summer months, the Commerce Department said Tuesday, a sharp revision from its earlier estimate of 3.9%.

The advance followed a second quarter where growth reached a rate of 4.6% after a decline last winter that was exacerbated by particularly harsh weather. The revision was led by an upswing in investment by businesses, a powerful force for growth in most economic recoveries but one that has lagged in the latest rebound. Higher consumer spending, including increased outlays on health care, and a narrower trade balance also contributed to the summer improvement. The gain makes the third quarter the strongest since the summer of 2003."

Things are looking up. And if they keep looking up like this, we may have to revise our Weltanschauung... or at least that part of it where we think the economy is going to hell in a handcart. On the evidence, it's not going to hell at all. It's going to heaven... without even dying.

Ready to Believe Anything: Nietzsche remarked that there were those who believe nothing and those who are ready to believe anything. There is a time and place for everyone... and this is clearly a time for the latter group. But wait. There's more...

Real personal disposable income is up. Unemployment is down. The lower oil price is putting more than $100 billion of spending power in US consumers' hands. And now we can see Seth Rogen's movie "The Interview" without risking assassination in a crowded movie theater. We watched the movie over the weekend, after we found the appropriate charger. It was so forgettable that we have already forgotten what it was about. But it seemed less and less likely, as the plot unfolded, that the North Koreans would get hot about it. There just wasn't much to get hot about.

Also, it included a familiar, and annoying, line that showed the writers know no more about money than investors do. When he is finally given the opportunity to interview North Korea's top man, our hero asks: "Why don't you feed your people?"

The same question could be asked of any leader anywhere on Earth. No matter whom you put it to, it is equally absurd. No leader feeds his people, no matter what his politics. Farmers feed people. Restaurants feed people. Grocery stores feed people. Mothers feed their children. Charities feed the poor. But political leaders are always and everywhere parasites who are fed by the real food producers.

A more intelligent question would have been: "Why don't you allow the food producers to feed your people?" But we are just picking nits. And why bother? Wonders are all around us, each one more wondrous than the last. Politicians feed their people. Central bankers rescue and rehab their economics. Stocks are more valuable. And we get gluten-free wafers at church. What more could we ask for?