The Economy: "A Tale Of How It All Went Down" 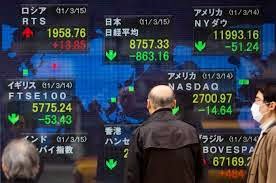 "A Tale Of How It All Went Down"
by Jeffrey Lewis


“Memory is fiction. So is the future…But there is some truth in fiction.”

"When they woke Thursday morning, the banks had been closed on the east coast for 2 hours. Electronic payment systems worked select areas only, government services, food, and energy distribution. In 24 hours those remaining systems were overwhelmed with volume and confusion. Forty-eight hours later a Federal state of emergency had been issued. All broadcasts were official. The media now fully blackened. Hospitals closed. Panic had taken over. In the lead up:

Low (manipulated) interest rates had created a false dawn in oil production. It was like salt in the open wound of failed banking policy. Higher real estate and equity prices were one thing. But energy inflation was threatening the credibility of central bankers. They would need the political cover to continue propping markets.

They were spinning plates in order to keep the plates spinning, but they couldn’t keep spinning forever. Beginning in June, they started knocking down the price. A series of end of the day low volume spoof trades triggered technical fund selling. It was enough to get the whole complex over the short side. The machines came in and the price went down. And the dollar began rising relative to its basket. The stronger U.S. dollar began having an inverse impact on dollar-denominated commodity prices, including oil. Emerging market credit quality began to fail quietly in the background of the news cycle.

Less over all dollars — or recycled petrodollars sent waves of uncertainty and impact on loan markets and Treasury yields. Very soon after the manufactured oil plunge, energy exporters from the emerging market saw a massive drain on the global capital. Essentially, a full one-third of emerging market GDP disappeared as energy exports fell. As a consequence, credit ratings fell - putting even more pressure on global liquidity ratios. The death spiral had begun far more quickly and sooner than anyone could have imagined.

We all had a feeling about this: For a long time observers wondered why they didn’t just come right out and say they are propping up/managing all markets at this point? This gradually, then suddenly, changed all at once. Most suspected there would be direct intervention in equities. Like the Japanese were doing. But the propaganda machine ran too hot. The markets wouldn’t ‘believe it’ or there were just too many black swans arriving at once. From domestic divisions to geopolitical tensions and hot spots boiling over - the confusion was palpable. There were too many places to look for blame. Too many contributing causes.

In the confusion, the real market re-asserted itself. Suddenly, the clearest path to safety was understood overnight. But there was no bid for precious metals. Like trying to force a fire house through the head of the needle; new measures in secret to re-stoke the engine.

The story was that it was an accident. Fear spread and as soon as markets opened they broke again. The President called in all the bankers - the Fed. To spread the liquidity, reserve ratios were removed. And they printed. Operation Extreme liquidity was implemented. Debt cancellation commenced. The banks were nationalized, but it was too late. Prices soared, people panicked.

A series of draconian civil clashes erupted and cities were put on lockdown. Shots were fired as the looting and crime spread across the world.