Chet Raymo, “The Seat of the Soul”

“The Seat of the Soul”
by Chet Raymo

"It was not my first visit. I had been there once before to talk with the great man, to the Castle of Cloux, near Amboise, in the valley of the Loire. He had been living there since 1516, at the invitation of Francis I, king of France. He was 67 years old, bundled up in a thick fur wrap by a roaring fire. His face showed age but not infirmity. Long white hair fell about his shoulders. White beard. Thick, downswept brows shaded his eyes like awnings. A strong nose. And of course the mouth, serious yet generous, not unlike the mouth of the Christ he had painted on the wall of the refectory of Santa Maria delle Grazie in Milan.

The king likes to surround himself with luminaries - artists, poets, philosophers, talented people of all sorts. Leonardo's reputation, of course, is known throughout Europe. It was inevitable that the king would draw him to France. A prize of war? So be it.

The last time I visited we talked about his paintings, only three of which had followed him to France. This time I wanted to hear about his anatomical studies. I had heard he had hundreds of drawings, recording the meticulous dissection of cadavers. "Might I see them?" I asked. Kindly, he aquiesced, and asked his young apprentice and friend, Count Francesco Melzi, to fetch several thick portfolios. As I carefully turned the sheets, I was stunned. Never had I seen such detailed representations of the human frame. Bones, muscles, tissues. Heart, lungs, stomach, liver. "From life?" I asked, forgetting myself. "From death," he replied with a slight smile. "Not so may years ago I had the privilege of working with Marcantonio della Torre, professor of anatomy at the University of Pavia. He gave me access to corpses."

As the thickly-annotated sheets slipped through my fingers I realized I was looking at something marvelous, a marriage of art and science. 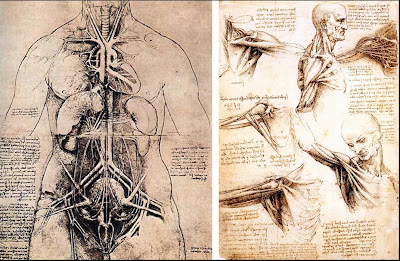 "Extraordinary," I whispered. "All a waste," he said. He closed his eyes. "A waste? What do you mean?" I knew I was looking at documents of historic significance.

He rocked quietly for a moment, then looked into my eyes. "I was looking of the soul," he said. "All my life I have been trying to capture the human soul in my paintings, the ineffable essence of a man or woman. But all I was painting was the surface of a person, the face, the skin. What I wanted was something else, whatever it is that shines out through the eyes, that warms and animates the skin. I wanted the thing behind the gesture, the lamp that gives the light."

"And…?" He pulled the fur robe more tightly about him. "I didn't find it. I didn't discover the seat of the soul. When I had taken the body apart, looked into its most secret recesses, all I had was a gory mess of tissue and blood."

"The soul had flown? Returned to its Maker?" "Perhaps." The old man looked to Count Melzi, who smiled sympathetically. Then Leonardo returned his gaze to me. "Perhaps," he said. "Or perhaps what I was looking for was there all along, in the face, in the gestures, in the glow of skin. As the music is in the tuned lyre. Dismember the lyre, untune the strings…"

I looked again at the densely inscribed sheets in my hands, the flayed muscles, the sectioned valves. "Sir," I whispered. "If I may be permitted. There is no music without wood and fret and strings. You have given us a …" "Shush," he said. He closed his eyes and his chin dropped to his chest. Melzi indicated it was time to go. I placed the anatomical drawings in their portfolios, and looked again at the old man in the chair. A great soul. Of science and of art.”
- http://blog.sciencemusings.com/2012/04/seat-of-soul.html
Posted by CoyotePrime at 5:15 PM